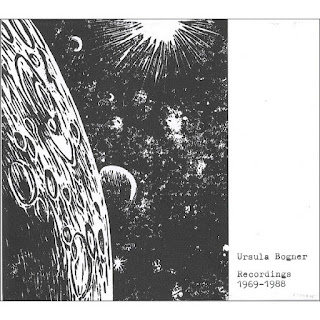 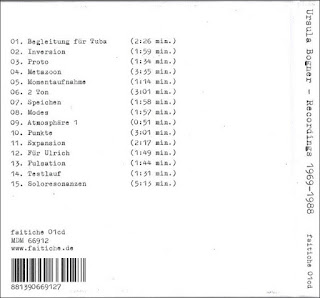 This collection of unheard electronic experiments from an very unlikely source,and undoubtedly the greatest pharmacist that ever twiddled an ocillator for pleasure. Ursula Bogner was a pharmacist, wife and mother, was obsessed with electronic music -- an obsession that drove her to build her own studio for extensive recording and experimentation.
Over the course of 20 years, she dabbled in many different styles, leading to a huge wealth of work and a bewildering variety of titles, from filter modulations, tuba tweaking, bass anthems, looping experiments, synth-pulse symphonies, to rhythmic patterns trapped in echo chambers. In the late 1960s, Ursula Bogner started to record her own music on reel-to-reel tapes. It all sounds not unlike the output of the BBC Radiophonic Workshop, totally unpretentious, and devoid of such mind corrupting poison as 'Ambition'. This wasn't intended to be heard by anyone but herself.So it has a rare kind of purity that electronic bigshots lack in toilet-loads.
Uncannily,Ursula had the dashing looks of a Young Dave Greenfield of The Stranglers(RIP), but being female, lacking Moustache.Something Dave himself also did without from about 1982 onwards.....eerily around the same time Ursula was making these unusual electronic compositions? Could they be the same person????


And what were George the Third's last words?.....thats right, "Bugger Bogner!"

Dave Greenfield was actually Rose West ... Peaches, Hanging Around, Strange Little Girl, European Female, No Mercy, All Day And All Of The Night, Blue Sister, Never Say Goodbye, Down In The Sewer, Nice N Sleazy, The (not so) Sweet Smell Of Success ????

... even (The Strange Circumstances Which Lead To) Vladimir And Olga (Requesting Rehabilitation In A Siberian Health Resort Of Stress In Furthering The People's Policies) ... clearly it means Fred and Dave.

Jonny ... why did it take a global pandemic for you to let us know?

Quite literally burying bad news! Shame on you!

tongue firmly in cheek? Ursula is none other than Jan Jelinek (Farben, Gramm, Groupshow, etc...)

Dave was Rose west only when he had his reading glasses on, and somehow they had an unnerving effect on his frontal lobe and the silly boy got into that daft old murdering kids lark. Come ooooon now, we've all done it in moments of weakness, admit it! So i think it fitting that we forgive Dave and Rose, and let him/her/it enjoy some well-deserved anonymity as alter-ego, Ursula Bogner.
Of late, burying news was all that was going on,and only a half-dozen or so kids. I blame Hugh Cornwell for leaving the band.

oh yeah....and anonymous...you're the kind of person who wanted to know who the Residents and the Banana Splits were, ruining the fun for everyone.
Anyway we now know that ursula was Dave Greenfield aka Rose West.Let that be an end to this!

Wasn't he the Strangler that looked like a hippie?

It's funny looking back, but I remember one day realizing I no longer cared who The Residents were. They were The Residents. If we had known the names as it turns out, they were nobody. Only of interest for having become The Residents. Most individuals are subsumed in the group identity any way. Who can name anyone from the Ozark Mountain Daredevils? If I say "Mark, Don and Mel", who but you or I immediately say "Grand Funk"? The Rez taught an important lesson, similar to the lack of "ambition" in the Bogner music. Many of the things you post have that quality, of course. That's why we're here.

@ Kzka....dunno about looking like a hippie,but Dave Greenfield was one of the few 'Punk' group members that looked like the majority of the averge 'Punk' audience. There were no Johnny Rottens in the crowd in 76/77, but there were loads of Dave Greenfields......then it changed in 1980 to being full of Watties from the Exploited.....aka THE END of Punk Rock.

@notrhfield hat...The cult of personality always fucks up the magic. My Residents obsession ended when Bill Drummond noticed a tuft of thick long hair poking out the back of one of the eyeball heads at a mole Show.....that image ruined it for me.So i dunno if they were shit after 1983 or it was just having their mystique removed that changed the perception of the music.
I still dunno who they are,or care, i think one of thems called Elmer or something,and there were only two of 'em?....now down to one i'm told?
They had the chance to go on forever as the Residents,and never die,but the internet fucked that up too,and tech fucked up the music.

For a conspicuously normal-looking person in a post-punk band, check out Martyn Ware in early photos of the Human League.

Re the Residents, I think there were four of them in the early years, plus a number of friends, but then they had a serious split in the 80s. (And at least one was gay, which should hardly have been surprising. Why would someone move from Louisiana to San Francisco in 1970...?)

As about the RESIDENTS DEBATE, I new HARDY FOX personally,
but HONESTLY never understood his mind or his subconscious
artistic genius - and no one did. Even Randy...

I can't remember exactly when it was that I stopped caring who the Residents actually were. But that could possibly be because I never really gave a shit from day one. (Which in my case, for the record, was around 1979.)

The cold hard truth is - no, they were not being "clever and subversive". They were a bunch of pretentious nerds who possessed marginal talent at best. A few good moments here and there? Sure. But everybody gets lucky sometimes.

Anonymous is right. Ursula Bogner does not exist. It is Jan Jelinek.