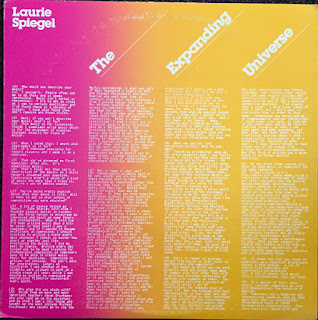 Just as the universe is not only expanding but accelerating, electronic classic from the seventies are expanding too. Like this vastly expanded version of 'The Expanding Universe' by music software innovator and goddess of early electronic music , Laurie Spiegel. No matter how unimaginative the title of this album,plus extras, is;One cannot help but be charmed by its warm electronic splendor. If this was made by some long-haired Kraut in a waistcoat and flares from 1976 we'd all be raving about it as another lost vastly over-rated Krautrock classic;but as its by some spoilt american academic,and,oh no, a lady,it rarely features in those best one hundred electronic albums lists in those trainspotter magazines for middle aged men with existential problems.Personally thinking, this is Tangerine Dream but with cleaner hair.
Composed 1974-76 using a computer playing the actual sounds by controlling analog synthesis equipment using the GROOVE (Generating Realtime Operations On Voltage-controlled Equipment) hybrid system which was developed by Max Matthews and F.R. Moore at Bell labs. Interaction with the computer was through a keyboard, a drawing tablet, pushbuttons and knobs, as well as complex "algorhythms" written in FORTRAN.....it says in the notes...one especially likes the 'pushbuttons and knobs' bit.

Laurie's music is more along the minimalist framework i.e. Terry Riley etc but is always interesting and strangely melodic over dissonance. Interlocking rhythmic passages connect and disperse in the course of her compositions always creating a wandering dynamic. One can compare some fo her compositions to the Berlin School sequencer bland-outs of early K. Schulze,but with less equipment....and,of couse, much cleaner hair.

DOWNLOAD some illegal spiegel HERE!
Posted by Jonny Zchivago at 11:26

Thanks for good stuff!

Thanks for the share and for the "...Tangerine Dream only with cleaner hair..." line. I almost did a spit take, mate.

She does indeed rock. But don't start gettin' all carried away and be bad mouthin' Edgar and Klaus, now. Stay in your lane, child.

Awesome post and write up! Thank you for this and for the endless gems.

Thanks for this. Think I'll buy the CDs based on your review.

See Fat Frank of V-O-D...they do buy the records because they heard it here first...rather like you did when you first heard the Vanity Records stuff on the FM Shades blog?.....and have now sold out?...struggling sales not a problem also?