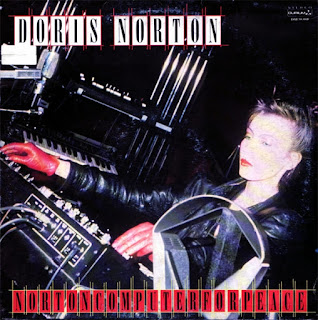 On the day that Florian Schnider proved the advantages of being an actual android rather than a pretend one, and died. Here's something that scientists are bending over backwards,in some cases literally, to try and recreate a woman who doesn't want to do anything but look pretty and be a willing and uncomplaining sexual partner.
Most of you electro-snobs feel a little bit of sick projecting mouthwards when you think of women in Electronic music,and automatically think it must be 'crap'.......mostly, you are right,god knows there enough shite males doing the same thing, but worse, they certainly ain't pretty.
This Doris outing from 1983 sounds very much like those proto-EBM Belgians, Absolute Body Control as far as I can hear,but without those awful Belgian blokey vocals,and sixth form lyrics.
Ladies,have far less ego-problems, and have the wise attribute shared with the 'Stepford Wives'...the ability to shut up and let the machines play.
The fact that Doris seems to have the ability to get up the noses of Electro-purists is a hearty recommendation to these ears.
Who do I prefer?...Absolute Body Control or Doris Norton?......as far as I can hear Doris Norton Is Absolute Body Control without Dirk, which rhymes with Burk, and,as I understand, is the flemish equivalent of Doris......the answer is they are both crap.
I think earlier in the blog I said that ABC......no not the Martin Fry led eighties hit machine, the Belgian EBM power duo......yes, I said they were rather good. I'm as changeable as the weather.
Don't forget I like Duran Duran(1st album only mind!) and A Flock of Seagulls.
Don't worry, I'll get around to Pauline Oliveros,and other avant garde shite(yawn!) in a while.....oh yeah,(note some mild excitment?) there's the BBC Radiophonic Workshop too,now that's proper 'Good' innit?

DOWNLOAD for peace HERE!
Posted by Jonny Zchivago at 20:38

Well, to answer your query from the other post - if you do actually like AFOS, I may very well take back anything bad I've ever said about you. I'll still KEEP it all, mind you. But I will take it back.

Yeah, his haircut was silly. So fuckin' what. AFOS were one of the best pop bands of the early 80s, full stop. And anybody who disagrees with that can apply their hipster lips to a nice cold frosted mug of santorum. (Keeping with our frothy theme....)

It's Frothy maaaaan.....WOT?...you've been saying bad things about me?....not aware....but i'm used to it anyway so,no probs.
Yes, i'm always banging on about AFOS, me.
But what about Duran Duran's first album? Simon Lob-On's a complete twot,but even his terrible lyrics can't blight this futurist classic.

It's the internet, man. I've gotten into it with you many times. It means nothing. And now, with the wonder of Mike Score's silky do, we've seen, as Dubya so wisely once told us, the human being and the fish can coexist peacefully.

Well, I'm a Japan man myself, so it's difficult to take DD too seriously. My nod would go more towards the Rio album, and then the "ITSISK" single - but everything after that is RIGHT OUT. 1983 is the year Duran Duran shall stopped being considered in any sense, and the year Duran Duran shall stop being considered in any sense is 1983.

And fuck LeBon's lyrics - hands down the WORST singer of that whole era. Awful. Zero redeeming qualities. The lyrics just make it worse.

You should just link the whole Mannequin Records bandcamp.

Drooling not dribbling.....of course Japan was the thinking man's Duran Duran, but Sylvian's Brain Ferry-isms and infernal warbling, make it difficult to listen to.....i even like their pre Roxy-music tribute act phase when they looked like Gun'n'Roses.....Dali's Car,now that's a record.
Rio....is bloody awful to these ears however.
I pretended to hate all this stuff, but in retrospect its as weird as fuck without trying to be. I even caught myself playing Classix Nouveaux the other day!?

«These online experts» always favors abstract soundscapes filled with refrigerator noise and farting sounds - and if there’s vocoders, a pseudo-classical moog riff or a beat to be heard… any kind of fun - its always so "sadly dated".

I love the older, "wiser" Japan - but it does also irk me how they sort of disown the first album now. Yes, totally different deal - but masterpiece of what it is.