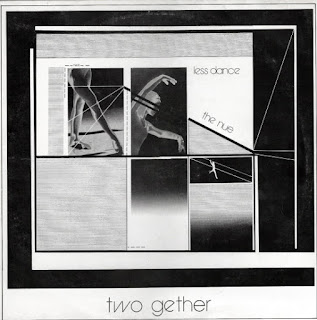 Ahhh, its nice to share innit?
Even Belgian Cold Wavers have that Darwinian trait to share for mutual benefit.As with this shared mini-album from 1982.
The trouble for side 'A's 'Less Dance' is that The N.U.E. (New Underground Entertainment), are obviously vastly superior to their chilly,but popier cousins on side one.
Less Dance could have been one of those early eighties bands who hovered around number 40 in the charts and then sank without trace, like 'B-Movie' or ,yes them again, Classix Nouveaux.There's a fine line between classic Cold Wave and failed chart dross.
The N.U.E. could have been on Factory Records, giving Section 25 or The Wake a run for their money,or rather lack of money. Possibly good, one must say.

DOWNLOAD two gether together HERE!
Posted by Jonny Zchivago at 00:20