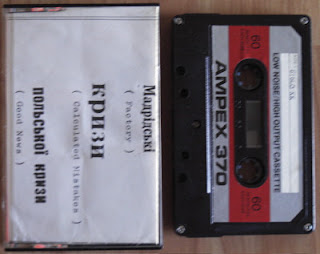 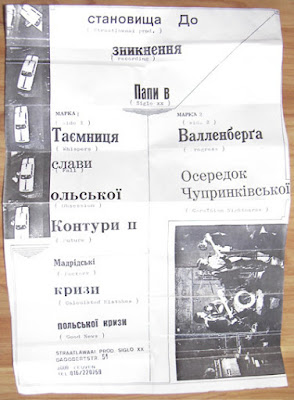 Siglo XX was a Belgian cold wave band from Genk, who remained active somehow, from 1978-1990.

Like the Mick Green (Pirates), Wilko Johnson(Dr Feelgood),Andy Gill (Gang of Four) progression for fractured lead/rhythm guitar*; here we have a fine example of the Jean Jacques Burnel (Stranglers), Peter Hook (Warsaw etc) and millions of doomladen youths all over the planet who wanted to the lead bass player in Joy Division,or at the very least Section 25..(inhale)...progression?
I dunno who the bass player was, but a couple of the group managed to acquire the very same army surplus raincoat (see photo below) that Ian Curtis wore in several of his iconic photographs from back in the day.

Lead Bass aside,we have two dueling Bernard Albrechts,and some atmospheric synthesizers.Which adds up to some charming amateur post-punk dark wave.
The vocalist is no Ian Curtis however, and sounds rather self-conscious...something one couldn't accuse Curtis himself of in the slightest.
They went on to record several LP's, none of which I have heard...but I like this post Joy Division effort a lot.In fact, I like any of these adorable JD Clones, of which Siglo XX were just one of a cast of thousands.

(* unfortunately the Mick Green progression led ultimately to the supremely awful Red Hot Chilli Peppers......be careful what you start with your genius kids!)

Tracklisting:
A1 Whispers
A2 Fall
A3 Obsession
A4 Future
A5 Factory
A6 Calculated Mistakes
A7 Good News
B1 Progress
B2 Caraïbian Nightmares

DOWNLOAD the genk branch of the joy division fan club HERE!
Posted by Jonny Zchivago at 09:19

Siglo XX stayed good for awhile after this! In fact, none of their subsequent albums are bad. They got a little less Joy-Division-y over time.

I've heard of them in the past, and likely own a little bit of their stuff but this is the exact sort of description that sucks me right in... Thanks again for all these gems!