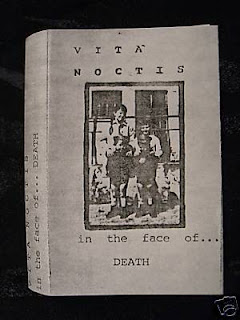 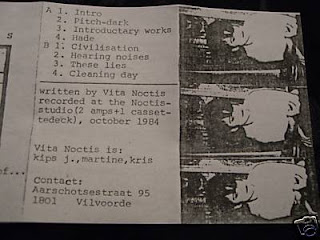 Classic bedroom Dark Wave from Belgium on the cusp of 1985.
That drum machine is a classic sound that will live forever.
I'll hazard a guess at it being a later version of a boss Dr Rhythm;the one that came with its own padded silver case.At least, I hopeit is, but i suspect its just a TR808.
It says,'Recorded at the Noctis studio with 2amps and a cassettedeck'......in other words in the Noctis/Kips brothers bedroom, with girlfriend Martine reporting for duty.

The total lack of reverb, echo or any ambiance at all is impressive to say the least.All wet noise absorbed by the duvets and soft furnishings.The vocals,delivered in a strong Belgian accent, sound at times as if some drunk demon is on lead vocals, enunciating the slurred words backwards, like some hidden message on a Queen album.At times it even sounds like they had forgotten their lines but couldn't be arsed to do it again.....my kind of stuff.
This is the sound of acoustically dead teenage depression from the Belgian suburbs......wouldn't you be depressed too?

DOWNLOAD teens in the face of death HERE!
Posted by Jonny Zchivago at 09:45

What a wonderful and a straight forward spell caster that has brought back joy and happiness into my life!!! Am giving this testimony because am so happy, I want to thank Dr. ojoka for the great thing He has done in my life , He brought happiness back to my life, I never believed in spell casters until my life fell apart when my lover of 6 years decided to call it quit almost when we wanted to get married. I was so emotional breakdown to the extent i could not do anything reasonable again, after 2months in pain before an old friend of mine introduced me to a spell caster on line called Dr ojoka, this was after I have been scammed by various fake spell casters. I was introduced to Dr ojoka a true Spell Caster. In less than 38 hours i saw wonders, my lover came back to me and my life got back just like a completed puzzle, and after 1month later we got married and it was just like a dream to me because i thought i had lost him forever. Thank you Dr. ojoka for helping me but most of all, Your Honesty and Fast Accurate Results. EMAIL HIM FOR HELP: dr.ojokaspelltemple@gmail.com or : through his number +2348144172934
ARE THE THINGS DR OJOKA CAN THESE
ALSO CURE.. GONORRHEA, HIV/AIDS , LOW SPERM COUNT, MENOPAUSE DISEASE, PREGNANCY PROBLEM, SHORT SIGHTEDNESS PROBLEM, Stroke, Bring back ex lover or wife/husband..

Just had to publish this spam...it could almost be from a very weird fan until the end bit.

OMG I just spotted that Dr Ojoka can cure Aids/HIV....as well as 'bring back ex-lover or wife/husband.

I would say it's a Roland TR-606 most of the time although there is a handclap here and there which is not on a tr606. Maybe from other source. Streetview Google the adress on cover shows the studio :-) typical Belgian depressing street. Nice people though.

"Dr. Ojoka & The Low Sperm Counters", what a great name for a band.
Thanks for the posting, my kind of stuff too. Btw, Dark Entries released the full discography of Vita Noctis some time ago, you can find it on Bandcamp. A big thank you! Cheers, JG

The snare screams tr606 but...
https://youtu.be/jaoPaLMrz1E
you could be right about the DR 110

JG....a fine name indeed, I quite like 'Low Sperm Count' on its own....of course the more butch among us would prefer 'high Sperm Count', but the latest figures say sperm is on the way out...if you know what i mean LOL.
Yeah I noticed the dark Entries rerelease when i was nicking the tracklisting from discogs.

I can't open the file, it says it's corrupted. Tried downloading it 3x on 3 different browsers.
**That SPAM is awesome**

Hi! I'm not going to pretend that I understand something about drum machines and analog synthesizers (I wish I did), but the discussion about the drum kit caught my curiosity. Here's what the bio of the band at Dark Entries says: "They recorded their earliest songs onto a 2-track tape deck in their bedroom studio using second-hand equipment they could afford: Roland TR-808 drum machine, Casiotone MT-31, Ibanez bass guitar and a Korg MS-20 keyboard." Thanks once again! Cheers, JG