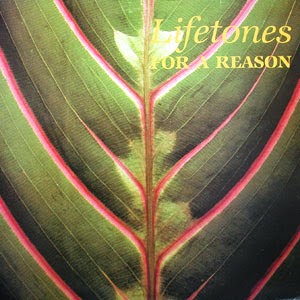 After This Heat, Charles Bullen, as Lifetones, went in the inexplicable, and safe direction , of White Reggae!? He didn't though, to my knowledge grow dreads, wear over sized wooly hats, and start talking like a native Jamaican; “Ev'ry t'ing Irie mon?” No, 'ev'ry t'ing is not fucking Irie' , especially in the unbelievably depressing cult of the white Rasta. One of the worst examples of the human flocking instinct,aka 'the Hive Mind'.


Having not heard this record for nigh on 30 years, I was expecting to hate its 'right on' guts, but, astonishingly, I worryingly found myself enjoying it?


It's a strange thing indeed, an amalgam of Elevator reggae-lite, sterile dub effects, and Bullen's multi-tracked nasal whine. Its reggae, but not as we know it; I can see this providing background muzak for some bourgeois fondue soirée, as much as a small gathering of white dreads, passing the funny cigarettes from 'de left hand side' in a south London squat. It's lowest common denominator Reggae.


Charles, can I call you Charles? Has only just released another solo project,some thirty years after the first. I wager it ain't white reggae-lite, thank Christ. He does however have a guest appearance list as long as your arm,alongside many production credits; bordering on the prolific even?


This record couldn't be further away from This Heat, who were innovative and ferocious experimentalists. Lifetones just follows the rules inside the musical strait jacket of Reggae's limited scope; but sometimes we just want an unchallenging listen,and relax......'No Problem mon'.......jesus, see w'happen to I'n'I?


Normal service will resume on the next post......and I promise.....No fucking Reggae!

I honestly don't think this is as bad as all that, though I can't help recalling an interview I read with Bullen and Hayward in which they said that with This Heat they were "playing for very high stakes" and trying to "radicalize the audience." The stakes of this music seem very low by comparison.

I feel I should qualify my earlier statement and say that the tepid feel-good lyrics on this album make me want to puke. Leaves no doubt about who the real ideological force behind This Heat was. I still consider Bullen a great axeman though.

I'd like to think that the purpose of these sickening lyrics was actually to invoke a puking reflex....but sadly I think they are meant to be this way. I will puke with you on this one.

Great album - soon be be re-issued.

Here's everyones chance to try before they buy.....which I strongly recommend in this case.

Light in the Attic is reissuing this gem in March! Already ordered the colored wax. Hell yes!

Some of the best shit I ever heard.

Five years old or not, this review comes off as incredibly racist.

Dear boringly predictable Post Morten ,If mimicking white rastas/trustafarians ,and finding Reggae boring is racist then i'm a trustafarian with long ginger dreads.
As usual I am a great believer in the accuser being the abuser.Point yer self righteous finger at others and find five pointing back at yourself.