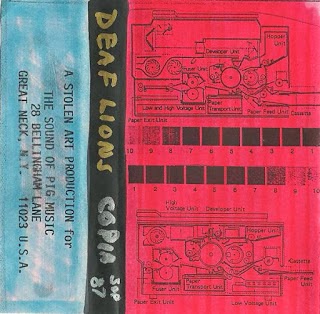 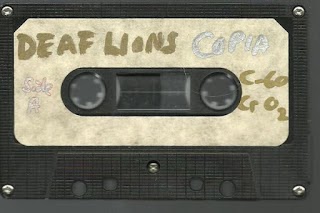 Plunderphonia, along with illegal downloading and (gag) Hip...er...Hop, were/are the biggest threats to the evil, art killing, bloated ‘Music’ giants. Like a cornered (deaf) Lion , they are desperately fighting their last stand as we speak. Along with their corrupt allies, the FBI ,Hollywood and associates, they have succeeded in closing many a blog like this one, and sued many a Plunderphonic artist like John Oswald out of existence.
The Deaf Lions are a perfect example of the power of Plunderphonics to challenge both the right to copy, and the concept of what music really is. As the exchange between Eric Morecambe and André Previn on the 1978 Morecambe and Wise Christmas show went: (click here to see this classic TV moment)
A.P. – “ You’re playing alllll the wrong notes!”
E.M. – “Listen sunshine! I’m playing all the right notes.......but not necessarily in the right order!”
Like cutting up text in the Brion Gysin method, it becomes something new, the same applies to cutting up chart hits, they become something non-chart and unpopular. So how can these corporations claim copyright infringement. Except in the case of Hip-Hop, where the sampling is very uninspired, and is mostly just someone reciting awful poetry over someone else’s recording (yes,there are exceptions!). Music is a language is a virus.
The Deaf Lions, obviously got their hands on one of the first budget samplers back in ’87, probably an Ensoniq Mirage by the sound of it. Then used the limited sample length to capture random parts of some terrible chart hits and soft rock monstrosities (there’s also some ‘good’ stuff mangled up in there too,PiL and the Pistols for example), to deconstruct them into something more relevant to the reality of our existence. Repetitive, monotonous confusion, is on the menu, reflective of the kind of life most of the human race freely choose.
This cassette chooses freedom , the freedom to create sound art without the corrupting/controlling influence of fake money; and the listener has the freedom to enjoy or reject it. The government and big business want to take these freedoms away. Its a more important and profound a right than the right to vote.........anyway who or what do you vote for? Which sad ego-driven liar with a napoleon complex do you want to sustain this madness for another decade? People died for your right to vote and the freedom to choose........CHOOSE NOT TO VOTE, its your right.

Ladies and Gentleman dressed as ladies, This is PUNK ROCK

DOWNLOAD the right to steal the stuff that belongs to everyone HERE!
Posted by Jonny Zchivago at 11:28

Whoa! One more go and it worked. Damn you move fast JZ! Very happy now and off for a wander with this in the headphones. Great stuff.