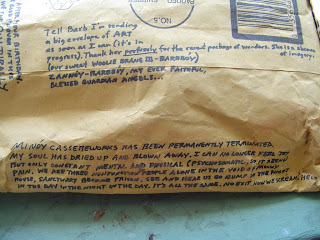 To conclude the recent slew of Minóy related goods; I think it proper to hear from the man himself, via the following downloads of a rare interview, and an audio letter he sent to a Al Conroy of Not Half  up there in Canada. They are quite interesting and give a sneaky peek into the reclusive and private world of  Minóy, or Stanley Keith Bowsza. He sounds like quite an eccentric fellow, as one would imagine.
Also check the picture of the last mail/cassette (above) he sent to Zan Hoffman in 1992, explaining why he no longer felt able to continue creating these endless masterpieces.And I quote:

" Minóy Cassetteworks has been permanently terminated. My soul has dried up and blown away. I can no longer feel joy but only constant mental and physical (psychosomatic,so it seems) pain. We are three non-functional people alone in the void of  Minóy mouse, sanctuary became prison.....no exit, now we scream, HELP!"

He talked the talk and walked the walk did Minóy; He said he was stopping, and he did. Not like that old showbiz cliché of old, the farewell tour and the comeback; for there was to be no comeback. He was never to make another recording or appearance again, probably sinking into a pit of depression from which he was never to surface. That great anti-music was a true reflection of his soul, may it rest in peace.

The interview is a cassette interview, naturally, where  Minóy answers prepared questions from a letter into his famous sony cassette deck, sort of a mail art interview. Like an underground smash hits type of interview,where he tells us about his favourite equipment and working methods; quite amusing. He does sound like a cross between Brains from Top Cat, Deputy Dawg on helium, and Jinx the cat; basically like a whole lot of cartoon animals shoved in a blender.

LISTEN to the Minóy interview HERE! 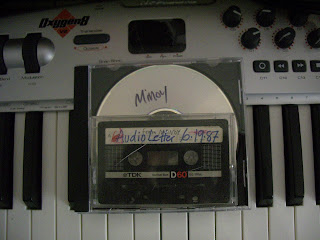 Very good, very good to have an actual interview with one of these guys... I quite enjoyed the interview with the founder of Snatch tapes too, that you posted a while back. Minoy's voice and way of speaking also remind me of Philip Seymour Hoffman's performance of Truman Capote! So yeah... I'm assuming Minoy killed himself then? The message with his last cassette to Zan Hoffman is pretty fucking brutal.

Oh shit, Persona and Nostalghia are two of my favorite films as well! Have you ever seen Nostalghia? It's pretty grueling to sit through, like most Tarkovsky that isn't Andrei Rublev or Solaris, but the closing shot sort of pays for all of that... it's one of the few jaw-dropping moments I've ever had regarding, er, camera work / cinematography in cinema.

Hi Veronika,
he seemed like an amusing chap,i don't think he killed himself,but....maybe he did?
You are very cinematic in your references, and i am ashamed to admit I have never seen Nostalgia! But I will right this wrong as soon as i have a spare couple of hours.
Snatch tapes' Philip Sanderson is a lovely guy.Still making left field noise.
Check out his Brut Smog blog(see my blog links).

Oh goodie, I'll definitely check out Brut Smog, thanks. Hey, if you're interested in expanding your cinematic worldview, there's one film in particular that i'm not sure you've seen, but... Lars von Trier's Antichrist. It's literally my favorite film of all time and one of my favorite pieces of art in general. Based on what I gather of your attitude, you'll either love it like no other or immediately dismiss it as pretentious cerebral artfilm mumboshit.

Shit! Am i that easy to pin down?! I like the title,so thats a good start.I'll put it on my list of things to do.

the Minóy book from punctum books with CD & cassette from punctum records IS OUT NOW at http://punctumbooks.com/titles/minoy/

The Minóy CD is comprised of nine audio compositions that span the years 1985 to 1993, drawn from recently discovered archival material. These tracks have been selected by the artistic director of the project, Joseph Nechvatal, in collaboration with the well-known American composer Phillip B. Klingler (PBK). Klingler (co-producer and sound engineer of the CD) houses the Minóy archive and has re-mastered the tracks, most of which have never been heard before (it was thought that Minóy stopped recording in 1992).

The Minóy Book contains sixty black and white portrait images from the Minóy as Haint as King Lear series that the photographer Maya Eidolon (Amber Sabri) created before his death in collaboration with Minóy (then known as Haint) and Stuart Hass (Minóy's lifetime partner). The book also contains two written monograms, one by close friend Amber Sabri and one by Joseph Nechvatal.

I hate to be that guy, but this posting sounds like it would be amazing to listen to. If only it was available...

Much props to you.

@ Mr P....are you suggesting that this isn't downloadable.....if mediafire are redirecting you ignore it and try again, it will download ,normally after the second attempt. Its just a marketing tool that earns Mediafire big bucks.
Its well worth listening to anyway.

Got it. I'm aware of the Amazon/Mediafire thing, but I could have sworn that both links sent me to Box.com which you have to sign up to access the download.