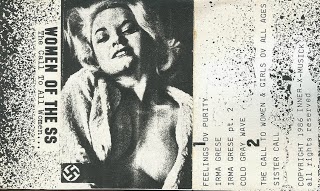 This is the best Women of the SS cassette. Brimming with throbbing drones and muffled female voices submerged in the fog of third generation ferric oxide. Sexy death camp chic at its very best; not that there is much competition in that most exclusive of genres. We are treated to a two track tribute to the "Angel of Auschwitz", Irma Grese; who, amusingly, allegedly had an affair with "The Angel of Death" , Josef Mengele. Two 'angels' shagging each other in an extermination facility paints a surreal picture worthy of the Chapman brothers; those enfants terriblé of Brit Art. Now, below we have a picture of the.....er...angel of Auschwitz, looking a bit like Genesis P. Orridge after a bad night out. As you can see, she, as a woman of the SS, was not aversed to wearing a sexy outfit. Note the revealing woolen skirt, hitched up to just below the breastline, with wooly tights (probably non-crotchless) disappearing into some shiny leather boots.Oooooh(heavy breathing), and that tank top, mmmmm sexy. A face that sunk a thousand ships. 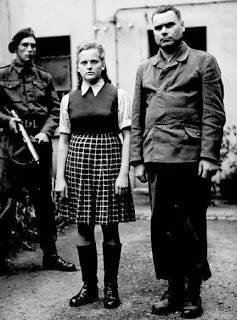 Obviously, this puts the Women of the SS project deep into the sad male fantasy arena, but at the same time explains a lot about male sexuality; so that in itself makes this a valid Industrial document. Oh, and its sounds great too! Imagine the lovely Irma herself, screaming into your shell-likes as shes beating you with an iron bar: "ACHTUNG DUMMKOPF! You vill be downloading zis, or DIE!"

Auschwitz was a labor camp not a death camp. Read the Red Cross evidence - no gas chambers. Fact.

At a risk of being labelled a 'Holocaust denier'....a criminal offence in certain countrys!?....There is an argument to suggest Auschwitz was not an 'extermination' camp. Birkenau was indeed a labor camp.The Gas Chamber that is there(Auschwitz) was built after the war by the Soviets.....for whatever reason one can speculate at will.....nowhere near enough cremation facilities....but, there were enough deaths there,from shootings, Typhus,and starvation for it to be called a 'Death Camp'.The actual death toll regularly gets rounded down,so no-one really knows how many perished.