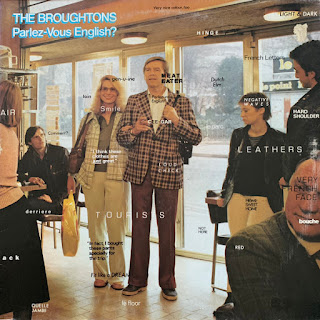 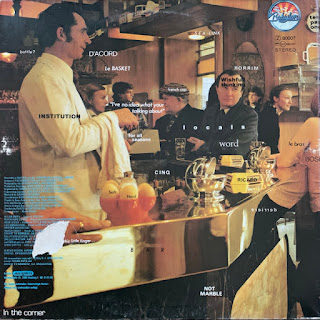 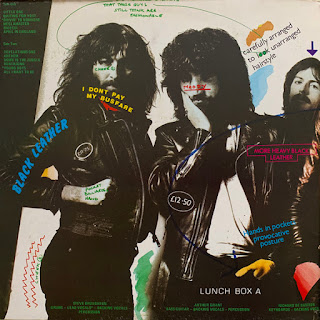 Me punky mates at School used to reckon that The Edgar Broughton Band invented Punk Rock,and they used to show off their Edgar records on the  day of the week that the form tutor used to allow us access to the School sound system in the Crypt, a spooky vaulted cellar thing,complete with a crucifix placed strategically on the wall at one end. i got to play my sisters misappropriated,by me, copy of "Damned Damned Damned" and got some XTC in, the teacher(Mr Crowley) played The Doors,to our great chidish amusement.There was some AC/DC, some 'orrible Northern Soul,which my mate told everyone that I said was 'good'!?...Oh the Humiliation,the laughter!? Then the Kid who liked The Stranglers...openly!?...whipped out an Edgar Broughton Record which was taken off forcibly after half of track one. Boring Blues shit said my aggressive Northern Soul liking mate(No wonder he topped himself)!?......how do young minds process information?
Intrigued,my weekly Saturday sojourn to the city center now involved a search for an Edgar Broughton Band record, of which there were,of course, none! Back in the day it was nigh impossible to find any record older than a couple of years post release date.This forced me into the potentially painful tactic of asking one of the hippies behind the counter if they had any Edgar Broughton Band records.
"Never 'eard of 'em mate,i'll ask the boss",which involved him shouting the request down the busy retail premises ,to which the 'Boss'....a hippie with his hair cut fashionably short-ish, this was 1979 after all...who inevitably replied with a loud "What?"......so it went on,until a 'tutting', eye rolling boss hippie returned to the counter.
"'ooo? Broughton?....yeah, They 'ad a new album aht, 'ang on mate i'll find it."
Five long minutes later ,he shoved an album in my sweaty mits, and said "Free ninety-nine mate"
I only wanted to look at it,then decide afterwards whether to invest my pocket money on something I had no clue about, but,intimidated I offered forth four crumpled pound notes,and
grabbed the bag and made for the exit,and the bus stop. Got on the bus, and when i was sure i knew nobody undesirable aboard,removed the record from the plaggy bag:
It said "The Broughtons", it didn't even refer to the mysterious Edgar? I've been ripped off I thought!?
Nonetheless, I thought the cover was rather good and when home placed it on the turntable and skipped through it at low volume.....it was interminably Shit!....even on the second play.Maybe it was one of those "Growers"?.....nah....shit!
There were a few albums like this, made by proto-punk legends such as The Downliners Sect, Twink and The Pirates for example, who decided to try and cash in on their new found fame by making new albums for the New Wave market. The Pirates excepted, all of these terrible records had little punky attributes,and sounded a prog rock band rediscovering their rock'n'roll roots, which had long ago shriveled and died.
That aside, listening again to this Adult orientated watered down New Wave,as made by a bunch of Dad-rockers; I find myself enjoying the cluelessness of it...its still terrible,but taking the parallax view it rather quaint...if you know what i mean?....'cus I don't!
'April in England'is a rather charming nostalgic modern folk song,and its nice to hear a tune sung with those slovenly rounded consonants of the Birmingham accent,as emphasized in the opening comedy number,'Little One'..and we all know,not edgar apparently,that comedy and rock are rarely comfortable bedfellows. Sadly these are the highlights on the album, with emphasis on the 'light'.
Now then, the old Edgar stuff from ten years previously,having now heard it in full,is certainly NOT my cuppa tea either,with some admittedly good awful guitar sounds, I can't get past the depressingly generic blues rock attributes, and even worse, the truly toe-curling Captain Beefheart impression on some of the vocals.Which,as the Captain himself was doing an impression of Howlin' Wolf,is probably a first in rock's golden era?....(they weren't the only band to do that, amazingly; as another Brit proto band Stackwaddy and had a nasty habit of doing the same thing!?).
There were many of these so-called Proto-Punk bands from the 60's early 70's who, under examination, were just grumpy blues rockers like Groundhogs who,good as they were,weren't in the slightest what one could call a precursor for Punk Rock and the noo wave.
So in conclusion,my findings are:
Maybe Pink Faires managed,at times to sound post 1976,and they did give birth to the UK Ramones Motorhead,so kudos to them.
Crushed Butler,Deviants,Fairies,blended with the bootboy end of Glam,Pub Rock,Bowie, Bolan plus Troggs, Who, and Kinks, were the ingrediants for the primeval soup of British Punk Rock; with a respectful nod in the direction of James Williamson era Stooges for seasoning;plus a pinch of Lou Reed's asshole max interview style as the croutons atop.
Tracklist:
Little One 3:10
Waiting For You 3:57
Drivin' To Nowhere 3:32
Meglamaster 1:58
Didecoi 2:31
April In England 3:16
Revelations One 2:45
Anthem 2:46
Down In The Jungle 2:43
Rent A Song 2:58
Young Boys 3:31
All I Want To Be 4:10
DOWNLOAD but you broughton it on yourself HERE!

A long, long time ago, in another universe, I used to stay at this house they all lived in. I remember it was very druggy. There was this roadie who lived there too, this black guy, who ripped off some dealers, and I was at this other house where the dealers showed up looking for him, with this glass Super Soaker like device filled with a caustic substance they used to threaten everyone with. Good times.

Reminds me of similar experiences when attempting to expand my musical horizons beyond punk rock in the early 80s. My friend had Pebbles, Vol. 2 which was my gateway to discovering "60s Garage Punk" or whatever you want to call it. In one of my forays through the used bins where I spent much of my time I came across an album ("Sinderella") by The Sonics who I was aware were a fairly renowned Garage Punk band. The cover looked dubious but I took the chance anyway and was rewarded with similar results: boring re-treads by has-beens cashing in on their newfound popularity. Some chances pay-off, some don't!

Mr dave..yeah,most of those pebbles bands were nothing more than one track,two at a push.And many never made an album in their short lifetimes. Then they hear the kids are diggin' them...ie the one song,and they have a nickname like the Adopted Uncles of Caravan Drone or something even more ridiculous. Then they make an album 30 years after they last tuned a guitar,and the producer says,lets get a bit more modern...Caravan Drone is yesterday, the kids want Sandal Gaze now. So they make a Caravan Drone Sandal Gaze hybrid that pisses off everyone....christ pop music is full of shit innit?...but i wanna hear some Caravan Drone NOW!

Dolmance...how dare you bring this image of rock'n'toll tomfoolery to these pages!? But i like the start of this gruesome tale of excess.
A Long Long Time Ago in a galaxy far far away....The Broughton's were still crap.
A caustic substance?...was that glass super soaker full of OMO, or cillit Bang?...those scoundrels.

Jonny... My experience with the Edgar Broughton Band was in 1970. I can't even remember what they sounded like, as I only saw them play once, and I was in a studio when they recorded something that at the time sounded pretty good.

However, this album, which I just heard for the first time is absolutely great. Serious. Check it out.

Ahhh. Revolver records. Hipper than Ainley's and better bags too. Wish I still had one of those. By far the best choice for hanging round the market place with, trying to look cool because you'd just bought an LP, rather than the 50p ex-jukepbox singles they sold in the newsagents which you usually got.
Andy

When I worked in the Market Place the Leicester Ratae used to buy the Edgar Broughton albums as quick as we could get them in. It was mainly the first 2 albums and not much else.

The hmv in Leicester has Edgar's son Luke doing an in store performance for National Album Day in October. Don't know much his stuff but I've seen him playing keyboards for his dad.

And that's a very nice bag. I've got all of the colours and the Revolver signs from outside the Market Place shop in my garage.

Sgtwilko...you seem to be mr Revolver, and a shrine in your garage?Waiting for the resurrection one day.
For those who don't come from Leicester,Leicseter Ratae were/sre the local Hells Angels types...Ratae being the roman name for our fair city.
The Broughton dynasty continues it seems.Velly interesting.

Hey Andy, Yeah,never did Ainleys often. Can't even remember the Ainleys bagss!? I likes St Martins when it was a small shop on cank street wassit?...got me copy of Metal Box from there (£7.45)
The early 80's it was The Very Bazaar basement shop that garnered my interest,, weird stuff in there. HMV in the haymarket was a bit shite,with their massive price stickers that you couldn't get off without fucking up the sleeve.Good disorderly singles section...just a pile i seem to remember....very easy to steal from.
Don't think i've bought a record from a newsagents in my life!?

In addition to Luke Broughton the doom laden Leicester legend Kevin Hewick will also be playing in HMV on October 15th. Should be an interesting day.