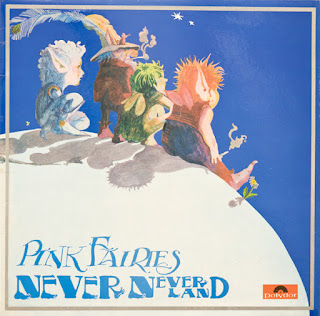 Pop Groups what played yer proper Rock'n'Roll were a rarity in the early seventies, but here's one of 'em, Der Pink Fairies.

I belatedly realised that i posted this album before,and you can read wot I wrote below in Italics. Since I wrote this crap, my attitude has since developed even more of a stink,so i will add extra cynical blurbage to the brief Mojo magazine style yawn-dom my nom de plume tapped out back in October 2016!?....and I quote:

"They contributed the proto-punk anthem "Do It" to world culture, a virtual punk manifesto expressed as a three minute symphony.
The rest of their canon never really matches the heights of "Do it",except maybe "City Kids" from the "Kings Of Oblivion" album gets closer than the rest; but they contributed a nascent punk attitude (fucking hate that word -JZ), and the roots of some of the more rock orientated Pub Rock."
Indeed "Do It" could be misconstrued as a clarion call to arms for the Punk Rock generation several years hence forth,and indeed it was.Many future punky types were regular Fairies fans,including self-proclaimed inventor of said silly genre and Prat, Johnny Be Rotten.
It could also be the anthem for this blog,as it was initially set up to focus on the classic DIY-pop era of 1979-83 cassette culture,but has since evolved into a trainspotters guide to rock'n'pop'n'all thing roll ephemera,mainly to avoid the bordeom of advancing age.A friend of mine was found Dead in his house the other week,computers still whirring,where he had lain for five days before being discovered,dead and whiffy. I fear this may be my fate one day.
I'm getting round to my obituary blog post, that,hopefully, before the heart attack kicks fully in, I can post with the flick of a finger before i drop to the floor awaiting discovery.The neighbours may notice something's wrong after approx a week or so.Poor old Joe was noticed missing online,believe it or not.Working from home! So the Fire Brigade got a call from Germany!?And kicked their way in.....if only they'd asked, we have a spare key,and the alarm code! I don't have the luxuries of worried employers (an oxymoron if ever there was one). Its normal for me to disappear for 7 days,so the girlfriend won't worry.This is the price one pays for being an anti-social arsehole....left as rat food until someone can be bothered.
Of course,the human tradition is for any good idea....DIY not death.... to have humble beginnings, then be overran with throngs of bandwagon jumping drones,like a dog with a new toy who rips the thing that gives them joy to pieces.DIY is now a genre, with all kinds of pointless groups filling up the empty slots at summer festivals with their not very Do it yourself...DIY? dogma....as dictated by the unfortunate youths who have the misfortune of missing everything thats ever happened in 20th century music and art.Stick to your video games and trainer kids,and leave the old stuff purely for nostalgic masturbation....like this blog.
Back in the day nobody had a clue that they could do all this shit  themselves. Now that the bunny is longtime out of the hat, every fucker does it.Diluting the idea so far that one begins to crave the days when Record labels ruled the earth and Massive Rock Group behemoths made us all feel like insects to be crushed under their chartered super-jumbo's complete with faux-Victorian interiors....I believe Led Zeppelin had something similar,including a real 19th century functioning fireplace on their jumbo jet:
This was,thankfully, unattainable for that cassette poet from Barrow-in-Furness,who will send you back his spoken word if you sent him a blank C-90 and a self-addressed envelope.It was just a dream for that shite bedroom band with upturned bins for drums to record in a 120 track digital studio, and get their awful wares displayed on a commercial space covering the entire planet and beyond.Everyone can be some form of Led Zeppelin nowadays.You can even fly to your internet arranged gigs on affordable low budget airlines......however, you are only allowed to carry one victorian fireplace as hand luggage.
Now, the clarion call is no-longer "DO IT!" for the clued up dozens, it's "DON'T DO IT!"....pleeeeze! I don't ever wanna hear your perfectly produced Nu-Folk Hip Hop collaboration with that guy in Mongolia, or you and your grannies Harsh Noise box set tribute to Jeffrey Dahmer.It's shit,you missed the bus,and the Bus has crashed because of the human plague.The same reason we will never live in peace.
Keep it to yourself if you wanna do it yourself, we killed it.
Anyway, i've done this myself....sorry, and re-written/updated the lyrics to the Pink Fairies classic "Do It"...it goes as follows as follows:

DOWNLOAD don't think about it just do it HERE!
Posted by Jonny Zchivago at 11:47

The Pink Fairies ought to be available on prescription - they're a cure for most ills (excepting bigotry, incest or morris dancing.) I'm almost tempted to download this again, on principle, despite having it already on nearly every format you care to mention (apart from 8-track.)