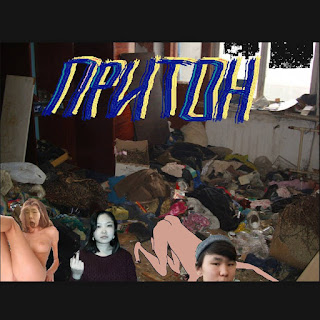 Yakutsk Siberia, December 2016, with an outside temperature of around -43°C (-45°F), Притон,or in the king's English,"Den", (so named after a Russian word to describe the dens where drug users and criminals gather...oooer! Mummy!) locked themselves inside their studio to record a self-titled album with a Tascam CC-222 tape recorder. Not sure this would exempt themselves from Putin's medieval mobilisation of anyone with at least one leg,but it should. That murdering cunty mcCuntface,Putin, likely has no idea where Yakutsk is.....but then again nor do we.Ask an American where England is and he'll say that you can drive to it by going north from New York;ask him where Yakutsk is and he'll probably punch you.
Digital technology has never sounded so bad.Making the most sophisticated of sound systems sound like its been played back through a 70's telephone receiver. An altogether sludgier, fuzzier, experience than fellow Yakutsk inmates Katiny Slezki, whom we all adore of course....don't we boys and girls?
Proves that not all Russians are genocidal barbarians, child rapists and thieves...just most of them...as far as I know anyway.Indeed, one never knows but its quite possible that as I write this the male members of Den have probably already been forced to kill old men and rape children with their commanding officer making sure they follow orders at gunpoint.All this eight time zones of distance between them and home.In fact i live closer here in France to Ukraine than the residents of Yakutsk do.At least they should be safe from the first tranche of nuclear fall-out,unless they've all been conscripted.
Let's look on the bright side shall we(?), at least there'll be plenty of hardcore stuff to write about for the next album?.....that's if they haven't had their skulls crushed under the tracks of a stolen Russian T-90 driven with alacrity by battle hardened laughing Ukrainians.In which case these are probably the last П​р​и​т​о​н albums for the foreseeable future.....puts a new angle on breaking up I suppose.....those crazy rock'n'rollers.

DOWNLOAD some cool from out of the cold with sub-zero effort HERE!

Putin is in the same club as ALL the other world leaders, figureheads/actors who play their parts, whilst the elite who pull the strings lap it up:
https://imgur.com/0qROLaI

Oh my gawd!Not the Rothchilds again!?
I've changed my job description to Resting Crisis Actor if anyones interested in employing me.

That cover artwork is a challenging wank, let me tell you. I just popped in to ask if you had either of the two albums by suspected homosexual band Jeremy's Secret. I can't find the buggers anywhere. Cheers.

Now we know where some of those CC-222s went--that was a seriously weird piece of gear. And speaking of barbarians, have you seen Barbarian? Jesus Christ. I knew incest and suchlike was bad, but I'd almost forgotten the reasons.

Dear Hamish, i managed to knock one out with that cover art what's wrong with you?
Of course where's the first place to go to find obscure Homosexual Bands?....Die or DIY? naturally.

Parmalee...Barbarian...rest assured i will...unprovoked incest is one of my favourite cinema minority genres....i'm guessing its a film?
You seen that Aussie film Snowtown?....ooh la laaaa! its devoid of reason.

Thank you Rabid rabbit..... i was gonna google translate it but......Slava Ukraine indeed......there's a cunt Russian giving me shit in the comments section of Soviet Synth wave vol 1 if you wanna give the cunt some extra shit!

I said it was challenging, not impossible, I'm red raw over here due to this unexpected titillation. I really want to hear the rest of the band's output, have to decide if ahead-of-time-brilliant or just pretentious toss. Of course your blog was the first stop, sounds like just the sort of depravity you'd have in your depraved archives. On the cover of their first release one can clearly see a boy's willy, it almost caused me a release of my own if you follow me. But seriously, if you do have either the EP or album made by these bumders please give us it. It's not bad actually, DJ Shadow sampled it, and he did that one good song that time. https://youtu.be/K4UTVMYan1M

My first exposure to underground Russian bands was a cassette Recommended sent out in the mid eighties. The impression was it was smuggled out of the country. [Contraband? Hell yeah, sign me up!] For the most part, the bands had a great DIY ethos, doing their best with what they had to work with. I wondered how they got away with it, but learned later no there cared very much, so I s’poze they weren’t seen as a threat to The State. Later, more confrontational bands like P*ssy Riot apparently were seen that way and took it in the chops, beaten by the pigs, charged with a ‘crime’, convicted by a ‘court’ and sent to prison/hard labour. So as inspiring as bands like this are, I worry about the consequences they may well have to endure. I mean, in a more tolerant society, any ol’ twat can do this sort of thing and it’ll be tolerated but more likely ignored. Ya want danger baby? Try it in Russia or North Korea. Piss off the dear leader and *poof*, vanished. Interested to see if you can come up with something like this from Iran. Only thing worse than an authoritarian state is one with a toxic dose of religious fundamentalism in the mix. Some in the US seem to think that would be a great idea here.

Poof...like The Plastic People of the universe did in iron curtain Czechoslovakia.....they did serious time for their Zappa impressions....quite right too.
Apparently there exists in Iran an underground Noise/electronic scene...its even on bandcamp!?.....i guess none of them are openly Gay so it can't be the real real thing...and no women involved ironically...or...laff laff...Iranically.

ps...however i am yet to find anything from The Democratic Peoples republic Of North Korea...but i live in hope.

Blame the shitty Laibach concert . It must have discouraged the whole country from trying to make music openly .Although Laidback err Laibach will claim the opposite.

Laibach have a lot to answer for, Dictator chic being one of them, and Rammstein......i was expelled from Solvenia when going to visit Ljubljana(laibach) funnily enough.The Croatian Police were frightening, but i imagine nowhere near as bad as the North Korean cops.....or Russian for that matter.

Definitely welcome:) Ahaha, will head over to the post.. always up for smashing some vatniks (Russian Putinists):)