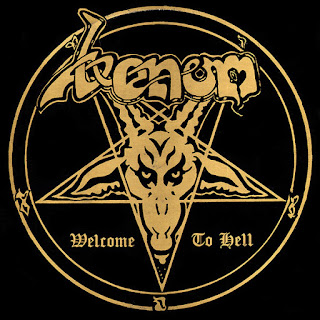 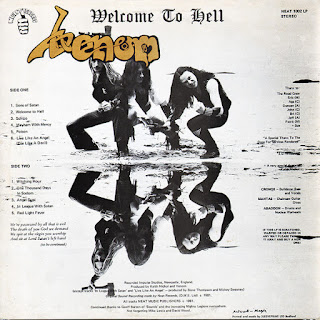 The only thing vaguely 'Punk' that came out of Newcastle-upon-Tyne,(north-eastern England for the geographically challenged,and Americans) was Sting,who must have come from the Posh end of town due to his undetectable local accent, and Penetration,who I had the questionable pleasure of reviewing their debut LP in the school magazine. "Moving Targets",pressed in a luminous vinyl that sounded like my stylus was dragging through cotton wool. Beneath this novelty pressing plant piss-take I could detect the unwelcome advances of something that sounded like....gulp!... Heavy Metal!?
The person responsible for this affront to my Punk Rock credibility was the geezer pictured on the rear of the sleeve with long curly locks and sporting an unusual waxy complexion. It was one Fred Purser, later to join Newcastle NWOBHM legends Tygers Of Pan Tang ! Of course my review slagged Penetration off as irrelevant metal throwbacks,dismissing their obvious talents to turn out a decent backing track to Pauline's attractive folky and not unpleasent timbre. If i had bought it on black vinyl it probably would have revealed a rather fine punky metal hybrid, but such is the impenetrable mind of a teenager that it would have made no difference.....in fact why I bothered,buying,or listening to it at all after reading the review in Sounds was a minor miracle.
The other major act to have crawled out of the Hell that is Newcastle,and hugely influential they turned out to be, was the world-changing force that was 'Venom'.
What these Satan worshiping Geordies unleashed on the planet would ultimately dwarf Punk Rock......merely by naming their second album "Black Metal"....now where have I heard that before?
The interesting thing is that they don't actually sound or look like any Black Metal band that we would encounter today. Technically, they have approximately the same musical talent as a headbanging Sid Vicious. They obviously wished they were Motorhead,but lacked the sense of humour to pull it off..
Check out this review from Kerrang no.8 1982 :
"What a pity the second album release on Neat had to be Venom's effort. "Welcome to Hell" is this music I ask? Rather a series of loud noises and hoarse croaks backed by no production at all. I don't like giving new bands a hard time, but what can you do when the product is so bad. As for your Satanic imagery lads - I'm frightened out of my wits (yawn)"- H. Johnson, Kerrang No 8, February 1982.......
Dunno who this H.Johnson was,....Holly Johnson meybe?.....but it was a popular point of view back in the day,and i kinda understand....NWOBHM it is not.....another label Venom don't deserve.
Apparently the band replied in Kerrang no 11,accusing the reviewer of being too old to understand.
This album was undoubtedly a pivotal release in Heavy Metal history.Dumping technical expertise,crisp production values and the screechy vocals,then inventing Speed and Thrash Metal all in one go;but noticeably not Black or Death Metal,for which they are most often credited for. Reviled and loved in equal measures upon its release, it would come to be seen as the first extreme metal album of all time, paving way for the deluge of metal sub genres that followed. Not that I can tell the difference between most of them,especially Death and Black Metal.
As Billy Joel said, "Hot Funk, Cool Punk,It's all Rock'n'Roll to me!"......Could have been said by the Lemster himself, as we all know that Motorhead invented all modern Rock'n'Roll idioms, be it Metal or Punk (maybe not Britpop?)and all sub-species, then gave it to our children. It's just that Venom wishes it was them wot dunnit ! Rather silly as they are,they have a strong case for moulding the Metal we know and love today.
Tracklist:
1 Sons Of Satan 3:37
2 Welcome To Hell 3:13
3 Schizoid 3:30
4 Mayhem With Mercy 0:58
5 Poison 4:31
6 Live Like An Angel 3:56
7 Witching Hour 3:41
8 One Thousand Days In Sodom 4:34
9 Angel Dust 2:39
10 In League With Satan 3:32
11 Red Light Fever 5:12
Bonus Tracks:
12 Angel Dust (Lead Weight Version) 3:03
13 In League With Satan (7" Version) 3:32
14 Live Like An Angel (7" Version) 3:53
15 Bloodlust (7" Single) 3:00
16 In Nomine Satanas (7" Single) 3:26
17 Angel Dust (Demo) 3:12
18 Raise The Dead (Demo) 3:31
19 Red Light Fever (Demo) 4:45
20 Welcome To Hell (Demo) 4:58
21 Bitch Witch (Outtake) 3:07
22 Snots Shit (Outtake) 2:10
DOWNLOAD a welcome from the hell that is Newcastle-upon-tyne HERE!
Posted by Jonny Zchivago at 15:09

try again, with mediafire you have to try at least twice.

Venom were hilarious. Penetration weren't from Newcastle though, they were from Ferryhill which is at the south end of County Durham.

Can you tell us what street Penetration lived on? This is on a don't need to know basis of course.

Seeing as how you're deluging us with crunchy/detuned metallic guitars, Jonny, howzabout some Fudgetunnel? I've only got their excellent 'Hate Songs In E Minor' so anything else you might have, or know where to find, would be tip top. What say?

Hey Richie,can't face doing anymore NWOBHM.Its the Lycra connotations!
Fudge Tunnel are truly great. I did see them in a small pub (Princess Charlotte) in my hometown in about 1989-ish...living near Nottingham all those earache bands played there. I can't remember what fudge tunnel i have though.
Doing some uk proto-punk now, but will return to some 90's metal later....that;s the era i lost my hearing in me left lughole...i blamed Godflesh for that.