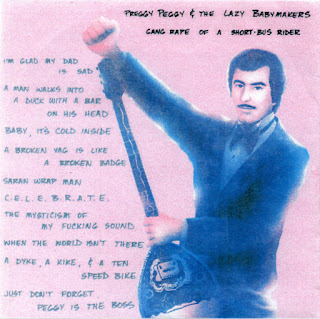 List under "Experimental" is a tasty cop-out when trying to categorize the unfathomable. Preggy Peggy and her lazy Babymakers are more aligned with the 'Piss-Take Experimental' tranch of Noise than anything experimental, or even original;although ,granted, there ain't many recording Artistes who sound as truly Nuts as  this.
Naturally I know nothing about the persons coupable for this attack on aural decency,and I dunno if they have any connection with The Ceramic Hobs' harsh noise offshoot "Smell and Quim", whose style is uncannily similar,if slightly less daft.
I knew many a young lady who would have qualified to have been called Preggy Peggy in my youth in the post war concentration camps that circled UK cities called "Council Estates". Giving flesh to the old joke about most British cities;Them being like an evactuated Rugby players bath,nothing in the center with a ring of scum around the outside..HaHaHa....I nicked that one from Jeremy Clarkson....the only posh boy in Doncaster,so he knows, right?
The Estate was also full to the brim of Lazy Babymakers too,whom i had to avoid,as they took exception to me being the only weirdo in the village.....they were not wery nice to me...boo-hoo. Therefore, like most Grammer School boys (ps,I had to pass an exam to go there so shut it!), I hate both the 'Upper'and the 'Under'classes equally.I believe in equality when it comes to hate.
Interesting point of information about my childhood homeland,was that the estate was named after Lord Eyres Monsell,who, before he had to sell his inherited lands after a compulsory purchase order in the fifties, to the UK Govt, became chums with William S. Burroughs at Harvard in the thirties.
Here's a relevant extract from Burroughs' excellent Biography, "Literary Outlaw":
'Billy met some of the more outlandish characters then at Harvard,among them Graham Eyres-Monsell, an Upperclass Englishman Whose father was the First Lord of the Admiralty. Billy thought he was glamourous because he was a Lord and knew all sorts of people, but at heart he disliked him,recalling:
"Ears Monsell....sounds like a Brooklyn gangster.He hung out with the undergraduates because he was in the habit of being deferred to and did not want to be with his equals.Like Cato gave his senate laws, and sits attentive to his own applause. He was a Cat-hater, and said he'd trained a Dog to kill Cats He was the one who told me that Vitamin A in large doses kills colds. He was a Fascist minded elitest,and not nearly as intelligent as he thought he was.I'm an elitest myself, but wouldn't want to be in the same lifeboat as him."'
Not sure I approve of Billy taking the piss out of the name synonymous with my childhood torture.Its a kind of warped Stockholm syndrome that i'll stick up for the place for the most rediculous reasons.I can feel a spike of annoyance if anyone dis's Leicester for any reason, never mind Eyres Monsell Estate....even the great William S. Burroughs.
In fact he isn't alone among literary genius's, to slag off my home town,the Father of Satire himself....and incidently a blood relative to yours truly,Jonathan Swift labelled the place a "Special parcel of Fools"....can't disagree with that,even if it included me for several decades.
The literary connections continue,Sue Townshend wrote the appalling "Dairy Of Adrian Mole" there, and Joe Orton lived in the neighbouring,and even worse,Concentration camp of the "Saffron Lane Estate".They used to send posses of sexually abused head cases on raids into Eyres Monsell looking for blood and someone else's sister,or brother,or family pet, to penetrate for a change...i'm crying just thinking about the trouser wetting fear of being beaten by these ruthless new life-forms.Who were they?....well,in this case it's more of a 'What' rather than a 'Who'.
One can only imagine the joy that Lord Ears Monsell(1905-93) would have gained knowing that his former lands were populated by cap-doffing breeders,hardly worthy of attending the Primary school which bore his name, never mind bowing to his magnificence.
Tracklist:

More Preggy Peggy a comin' up.

Very great, as is Get An Ace Case Of The Measles and that split they did with Kommissar Hjuler