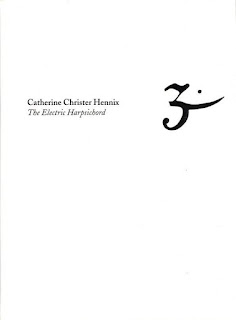 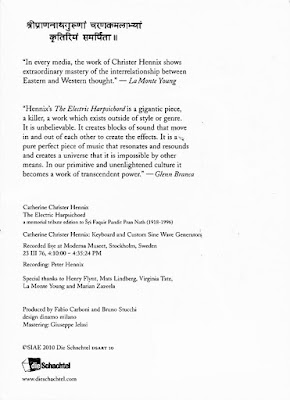 During my section on females of early Electronics, one carelessly overlooked this drone epic by Catherine Christer Hennix, who was...it says here.....a Swedish-American composer, philosopher, scientist and visual artist associated with drone minimal music.There's no evidence that anyone else but herself gave her the often tenuous title of Philosopher,but there IS evidence of Drone music,and here it is.
You got it.....a Drone done on a....yep...Electric Harpsichord.There is also evidence that Hennix actually moves her fingers on the clavier rather than just holding down a chord for 25 minutes.Not sure how sustained an electric Harpsichord is, but i guess ,not too much, so the notes have to be retriggered or we would have silence instead of another drone.
Name dropping time:La Monte Young's a fan,Henry Flynt is a pal,and Glenn Branca found this influential.
That changes everything and nuthin',but it helps in the marketing,even if their plaudits could have easily been taken out of context like those ridiculous quotes on the back of paperbacks...."Amazing","Sensational","Superb!".
There's little info about this performance on the cover,especially after Young and Branca have used up the space, but i gather it was recorded in 1976? 25 minutes of backbreaking toil....maybe on another day she may get out of bed to do another 25 minutes....life's hard in the art world.
Tracklist:

She's knocking some stuff out at Bandcamp .

True Mike, and the two LP sets put out by Blank Editions are super, also from Stockholm (1974 and 1976). She is still going strong, and prefers to do 5+ hours of concert at full volume. Like we like it.

Many thanks for sharing this ....it is very much appreciated.....stay safe & cool.