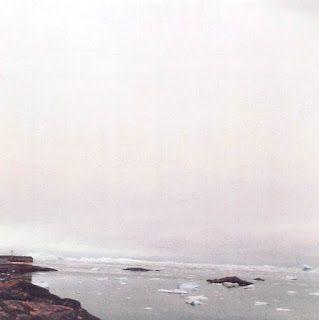 Another Two Hours of Jandek anyone?...........I SAID ANOTHER TWO HOURS OF JANDEK ANYONE???????.....silence.... I suppose if I had the sound on my computer turned on the noise of everyone screaming "YES!" would have blown the speakers.....hang on...the volume is on 11!?....You bunch of bastards!
Aw Fuck it...I dunno why I bother.....in fact I don't know why you bother,or more to the point why Jandek bothers? Which inevitably leads us to wonder why anyone bothers to do anything.The bleak image on the cover represents your reward for bothering to do anything. A frozen wasteland of disinterest. All will be vaporised in time,so the logical path is to either hang around waiting to become less than nothing,or fill in the finite empty space by creating something,anything, that will exist only within the space and time it takes to create it. Poof! It's gone.
Jandek is the master of this temporary dark energy.Despite what that bloke who analyses Captain Beefheart with a fine toothcomb says; as he has done with Jandek too.If Jandek has a repeatable tuning,he certainly never uses it,and if he does its accidental,nebulous,or merely a suggestion of a tuning.
Fittingly,and unsurprisingly, this performance was leaked into the atmosphere at The Institute Of Contemporary Art in Boston;better named the Institute of Temporary Art. I think I like that concept,and Jandek is the embodiment of that,or rather the UN-embodiment.
The music is your standard Avant-Garde spontaneous sound that we've heard a thousand times on countless improvised discs,but...it has Jandek's moaning semi-improvised vocals,and some of his slack stringed fretless bass playin',so it now stands out from the crowd.
Just imagine a drunken hoarde of Imrovisers coming to trash the town in protest against the impending budget cuts in the arts sector post co-vid.No longer will this stuff be supported.....they're gonna have to make music that at least some people like,or....gulp....work for a living!? Horror of Horrors.Or they can make music in their spare time,like everybody else does, quite easily.Especially stuff that you don't have to write down or memorise, like the Improvised Avant Garde. I admit, i'm one of those pretentious twats who like this stuff......if it was someone else saying that I would say that I was lying to appear like an intellectual....no lying about it!!! I AM an Intellectual OK!?....fuck you Dunce Boy.
Tracklist:

If you carry on like this I'm going to need a bigger hard drive...

When it comes to Jandek please don't bother. Utter shite

Indeed, why do we bother? Just 'cuz I s'poze.

Is that the same 'Unknown' making comments that could be construed as contradictory?

whats this "piece" called? they usually have a sub-title. and thanks for putting these up, ill finally one day get round to updating my corwood collecion only got to 806, so thats 40+ to go (atleast there the 50% discount to make up for the postage)

50% discount in business terms usually means that its a break even deal for the vendor. He must be alright for money.