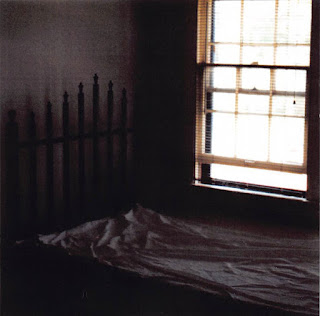 Here's Jandek treading water on his grand piano with three very capable Avant-classical musicians improvising proficiently to keep the representative's monophonic tinkling from drowning.
This neo-classical meandering allows the average Jandek fan to play Jandek in front of his intellectual,or pseudo-intellectual friends. Not that a Jandek fan would have any Intellectual friends,or even have any friends at all?
Such morose misery is seldom bettered by any serious musician on the inside of the classical clique,but being excluded from such incestuous circles is not going to stop Sterling Smith from doing exactly what he wants,so Neo-Classical this is.
It does very rarely change in tempo or mood,like a constant dull ache somewhere between your ears and cerebral cortex......two hours of it.
If this monotonous torment does actually reveal the true meaning,or otherwise, of life, then you're dead already.
Oh yeah....you wanna know where the hell Grinnell is?......I didn't know either,there's no info on the insert,so i had to google it....You guessed it,It's some forgotten Shithole in Iowa USA, which according to the town's website is the coolest place in Iowa!?....dread to think what the least 'cool' town in Iowa could possibly be like?
Not sure but I think there may be a Grinnell in Indiana too?There's definitely one in Hell....maybe he played in both?Hence disc one and Disc two?...saving the performance in Hell for...well...anyday now....he ain't no spring chicken no more.
Tracklist:

Thanks for all of the great music of the unknown.