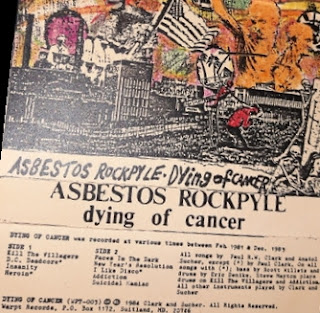 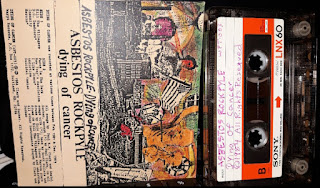 One of the best 'Rock' names in 'Rock' was Dinah Cancer (Geddit?), who was in 45 Grave I think...who cares? This use of the phrase is made to look like an undiscovered work by Oscar Wilde compared to ramshackle American duo Asbestos Rockpyle,who seem to have no idea what standard time signatures,or even musical instruments,could possibly be,and why should they(?)...maybe because they couldn't count up to four.
It all sounds like a dumpster emptying a cargo of junk into a disused quarry full of fucked up musical instruments. The lyrical content is not at all your standard literary poetry,with a stubborn refusal to rhyme any of the lines,or even deliver them in sync with the wavering music.
They sound like the bastard child of Half-Japanese and The Happy Flowers;especially when delivering the single best track about the early 80's Punk scene in Washington DC...."D.C. Deadcore".....indeed a classic.
"The people in hardcore are a bunch of Fucking Dicks"...a erudite observation from underrated (for a reason) singer/lead guitarist/lyricist/producer Paul R.W. Clark of Asbestos Rockpyle, waxing lyrical about Dischord Records and their offshoots.One can't disagree,but then again, this observation could well apply to everyone in the arts.....including Asbestos Rockpyle themselves? And Art it certainly is!?
Tracklist:

A1 Kill The Villagers
A2 D.C. Deadcore
A3 Insanity
A4 Herion
B1 Faces In The Dark
B2 New Year's Resolution
B3 I Like Disco
B4 Addiction
B5 Suicidal Maniac
DOWNLOAD the cure for cancer....suicide....HERE!
Posted by Jonny Zchivago at 21:59

"The people in hardcore as a bunch of Fucking Dicks"...is this meant to be a bad thing?

If it weren't for Dicks, none of us would be here now reading this fact.