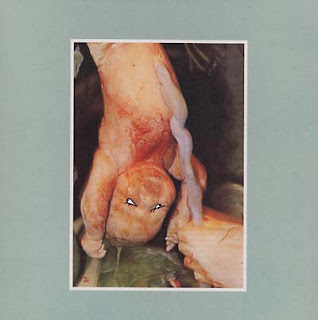 Preggy Peggy and her be-tracksuited albanian boyfriends or boy fiends, the odd well hung swarthy babymaker,undoubtedly called Mongo, respendant in his bulging Lee Cooper stone-washed jeans.An item worth killing for in Enva Hoxha's Albania.Mongo's thick set monobrow frames a stare that suggests he did kill for those jeans;an act he called,or rather grunted, 'Going Shopping' back in the motherland....am I being Racist again?...probably, but this is how I imagine this anonymous collective if they existed in real life, and I'll shout down anyone who tries to trouble me with 'Facts', alternative or otherwise. I don't wanna know who they are thanks,and leave me with my ill-advised fantasy. I'm still scarred by Bill Drummonds recounted Residents' Mole Show experience when he noticed a thick wad of long curly hair pertruding from underneath one of the eyeball heads. This couldn't be true,surely?But now ,with the culture diluting...am i being racist again????....well at least uncomfortably right wing ,for which i apologise......where was I?...Ah Yes, the culture diluting Internet, revealing the identities of the Residents as an example of the Myth Busting of the gossip obsessed porn addicts that this 'Future' is populated with.Shit innit?
The cover is reminding me of the moment when my Daughter entered this world.An event commonly referred to as "Beautiful",rather than the horrific and painful thing it truly is.Like something out of Hellraiser!If ever a moment confirmed what i had already suspected, that there is no god, this was IT! Using flowery language to describe this,and other, reality confirming events ,transforms them into something Happy and full of the beauty of life. Its, in fact, the oldest usage of Alternative Facts as a political weapon in the long history of lying to oneself. I notice that "Beautiful" is one of ex-president's Donald Trump's favorite words from his very limited vocabulary. This is NO coincidence!
Somehow ,some Belgian chap decided to release a 'proper' vinyl record of Preggy Peg!? Thankfully it keeps up the high standard of abstract Industrial Pop as viewed through a kaleidoscope dunked in shit that we came to expect from them. Beautiful!?
Tracklist:

A1 Come Ravage The Rice In My Rug
A2 Shep Makes Coffee
A3 How So Ever Far
A4 Not A Dry Eye In G-Unit
B1 Amonia Blud
B2 Legs N.Ahll & "Lucky" Lester Lickley Meet Sammy The One-Eyed Pirate... In The Dark !
B3 Play Meaty For Me
B4 Buttermouthed Buckslappers Of Fu Manchu
B5 Saul Peels An Onion
B6 The Circle With A Hole In The Middle
DOWNLOAD and hear the beauty HERE!
Posted by Jonny Zchivago at 13:02

My Bum Is Itchy

You have struck a golden vein of shit here JZ, much appreciated? Incontrovertible, absolutely true to herself/itself.