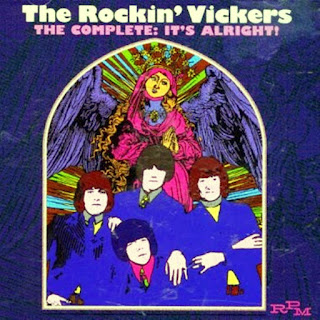 Did someone mention the Rockin' Vickers? The biggest phenomenon north of the Watford Gap in 1965 to 66 I've heard....but listening to this, I doubt it.
A mixture of Beatles-esque harmonies (Like everyone in 1965), with a dash of "Satisfaction" fuzz,(like everyone in 1965 to 66), and some Ray Davies songs (of which there wasn't enough of in 1965 to 66!).
The only reason this obscure working mens club beat music from up North is here, is because Pub Rock Legend Ian 'Lemmy' Kilminster joined this beat combo in 1965,as guitarist, and left in 1966 to roadie for Jimi Hendrix and join the Sam Gopal Band.At least one good move there.
So the Rockin' Vickers (fine name by the way), never got within a hundred miles of Joe Meek, or sucess, but were allegedly very popular in the pubs and clubs of northern Britain.
For some reason they did a version of "The Kids Are Alright", changed the words and called it "It's Alright"; or more likely they copied The Who song, later to be told they will have to give Mr Townsend the writing credit.

DOWNLOAD from the church of lemmy HERE!
Posted by Jonny Zchivago at 16:17

Aha. Who'd guess that a fellow who played on something called "Zing! Went the Strings of My Heart" would ultimately go on to lash out such additional pop gems as "Die You Bastard", "Killed by Death" and "Iron Fist"?