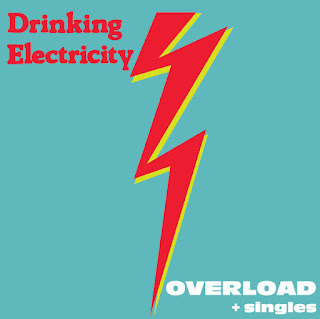 Inmates of Bob Last's Pop:Aural imprint,whose professed aim was to get a leftfield act into the pop charts by stealth.
Having been robbed of The Human League by Virgin,an independent label who had subverted the Pop Charts many times before already....a fact that went unnoticed in the Last household it seems.It didn't stop him from ruining The Fire Engines,among others, in his quest for Pop mogul-ism in the guise of the hip priest of 80's pop.
Nonetheless, Bob Last was responsible for some the greatest hip-pop failures of the early part of the decade.
Drinking Electricity, from somewhere in downtown Surrey,had the perfect set-up;guy and gurl with tech who weren't too harsh on the eye. A lot of the tunes sound like you've heard them before elsewhere,there's hints of "Assault On Precinct 13" and the main riff of "Being Boiled" appears(I guess that Bob felt it was his property?) ,but transferred to a funky bass guitar.
In all, its a fine collection of wonderfully analogue minimal electronics coupled with spiteful robo-bitch vocals treading on the heavily mined no-mans land of too "kool for skool" territory.....(for a fine dissertation on the pitfalls of being too kool for skool click HERE;)
There's also an irreverent cover of Brit Rock'n'Roll classic, Johnny Kidd's "Shaking All Over", which gives me an opportunity to direct you to a funny story concerning said tune which one had recounted earlier in the vast archives of this blog HERE!
But don't let all this nostalgia divert you from the fact that this Drinking Electricity collection is rather flipping GOOD, Flamin' Nora it is...there's even a Flamin' Groovies cover too?)...Don't wanna sound too enthusiastic,but these kids sound slightly more like a Belgian twosome than UK Synth duo;not that there's anything wrong with that,just two different beasts. the UK version got lots of hits and got rich,but the Belgian equivalent got ignored and poor....mainly because when they sang they sounded like a motor neuron disease sufferer's speech synthesizer;which was briefly novel once upon a time if it was only for a couple of tracks......which Drinking Electricity did conversant as they obviously were in the do's and don't of pop music.....there you go....too kool for skool again!
Tracklist:
1 Breakout 3:25
2 Discord Dance 3:27
3 Good Times 3:34
4 Colour Coding 3:33
5 Fall 3:53
6 Breakout II 1:56
7 Countdown 4:09
8 News Peak 3:46
9 Twilight Zone 3:11
10 Superstition 3:35
11 The Promise 4:11
12 Subliminal 7" 4:08
13 Random Particles 3:23
14 Shaking All Over 3:07
15 China 2:53
16 Cruising Missiles 3:50
17 Shaking Dub 4:15
18 Good Times 12" 4:38
19 Breakout 12" 5:05
20 Subliminal Radical Re-mix 6:12
21 Shake Some Action (Demo Version) 3:30
DOWNLOAD something shockingly good HERE!

Fantastic! Even my grandson is digging it.