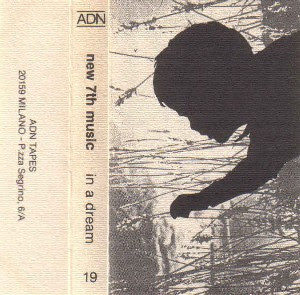 Paul Kelday sometimes appeared on the cassettes made by his brother Phil's improv group 'New 7th Music', which involved doing what you felt like doing and calling it music basically.So don't expect going on a ambient cosmic journey into the farther reaches of the infinite pulsating brain at the center of the universe.This is the kind of music,in the loosest sense of the word,that our hominid ancestors would have played as soon as they picked up a dead beast's jawbone and beat each other to death with it.
As spontaneous music combo's go, these chaps aren't quite of the Derek Bailey,Hans Bennink,Evan Parker ,Scratch Orchestra standard,and more like a club of weirdo's who meet every Tuesday evening at the community centre ,tape recorder in hand......;but that's what I like about it. Ain't no criticism;we exist here to celebrate the Geek,and reject the mundane.....although a lot of the time the mundane is as equally alienating for the vast magnolia coloured armies of pointlessness,as it is mundane.When done correctly the most abominable of species can be used satisfactorily against your brainwashed oppressors.
Just listening to this could well get you euthanised in the new Russian empire that suddenly awoke recently....much to the 'joy' of 84% of the Russian public according to a recent Russian Government Poll which required contact details and ID before receiving an answer,as three tooled-up thugs wait for a signal near-by.
Tracklist:
A1 Live At The Richmond, Brighton
A2 In A Dream
A3 Violin Phase
B1 The Bitter Humours Of Fermenting Passion Flow
B2 The Circle Of Violence
B3 Life Began From Here
B4 Ritual
DOWNLOAD in your dreams HERE!
Posted by Jonny Zchivago at 13:13

Bloody hell, I had no idea you had something from Han Bennink on your blog!!! Downloading it straight away! Seen him perform many times in the 80's and a couple of times in the 90's, often with piano player Misha Mengelberg, often solo performances and once with Cees "IJzermans" Meurs with his drumkit made up of old ship parts, he was drumming in Kiem at the time and those of us, privileged to have seen that performance, still talk about it sometimes, some 38 years later and it's a shame it was never recorded, Cees just going at it like the beast he was, razor sharp, faster than the speed of light rhythms and Bennink just going at it like the animal he probably still is.... Usually a Bennink performance had the first few rows full of drummers contemplating suicide or at least picking up another instrument or even leaving music all together, truly a phenomenal drummer....