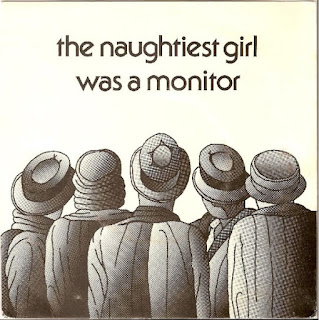 Owner of ,probably, thee very worst band name ever conceived , The Naughtiest Girl Was A Monitor ( TNGWAM ) made some rather uninspired Synth-pop to rival fellow Sheffield pop-synthers Human League's exceedingly crap "Hysteria" album, or anything by the truly terrible Heaven 17.
As they didn't have a bloke with a silly lop-sided haircut,or a pair of utterly talentless Townie dancers, TNGWAM never got whisked into the studio and have all their hits written by Martin Rushent.The result being, no-one remembers them no more outside of Southern Yorkshire....but,by 'eck, maybe a shrewd name change would have helped them commercially? If you want a hit never have a band-name that doesn't bore the punters three words in.A fine example of how not to do it,to be taught in a lecture at one of those ridiculous Pop academies that are replacing really useless stuff like Engineering Degrees at universities all across the western world.
The name, I am Told, comes from a series of children's books written by nasty Nazi sympathizer Enid Blyton.The 'monitor' part being a reference to the poor sods who had to go and collect the Milk and distribute it to the other kids in the class...until Margaret Thatcher stopped this Free Milk for kids nonsense;so not only did Thatcher liberate the miners from the pits,she also liberated the minors from the humiliation of being the Milk Monitor.
I was once press ganged into being the Coffee Monitor for, and by, the staff in the Staff room...don't worry none of the fuckers touched me up or anything;despite the head master being a weirdo god squad nutjob.Luckily i went to a grammar school after my hard time in the primary school system, to attend a strictly secular institution full of us supposedly intelligent kids...so no stupid fuckers to pander to with the patently absurd tales contained within any Holy books.The wheat was sieved from the chaff,and we had science lessons.Who says I'm not Elitist?

Sheffield, of course, is one of the major gene-pools of Synth pop,post-punk and Industrial culture,so naturally TNGWAM were gonna struggle,and inevitably sank without trace,not even an oil slick left on the vast ocean of popular music;and no-one is gonna be bothered to send a submersible either...for a reason.....which I wager you can guess.
Tracklist:
1 All The Naked Heroes 2:30
2 Diary 5:02
3 Front 2:37
4 Is All I Need 2:29
5 Marcella Ball 4:56
6 Sensation / No Sensation 2:54
7 So Far Away 3:12
8 Wax Museum 2:48
9 What We Don't Want To See 3:34
10 Panthea
DOWNLOAD to hear some naughty girls on your monitors HERE!
Posted by Jonny Zchivago at 14:19

Email ThisBlogThis!Share to TwitterShare to FacebookShare to Pinterest
Labels: 1980, 1981, 1982, Minimal Synth, Synth Pop, The Naughtiest Girl Was A Monitor, UK

FACT: reissued by the gorgeous Frank N. Farter of VOD fame some years ago. He will be displeased you think they are crap.

Another FACT: Frank N. Farter can go fuck himself up his own corpulent and gaseous backside.
These were also reissued more recently by one of the naughtier girls of the group.

'Is All I Need?(?)' was used in a commercial for something or other around ten or so years ago, I think, maybe.

Jonny, it was Jo Callis of the Rezillos who conferred Pop Greatness on the lucky Oakey & co. A FAST Records / Bob Last connection that really paid off.
Rushent couldn't even get Joy Division right.

There are those who would say that Hannett couldn't get Joy Division right either. The albums sound like another group.....a great group however,but a different one to the live JD.
Dunno about the Bob Last Callis connection,they never achieved much in the way of chartworthy dross before Dare started evolving....but can't dismiss some influence there,tunes wise and philosophically as in the subvert from the inside pose that Last loved to bang on about,but only The Associates managed to do it....i think Bob Last left a comment on one of the relevant posts on here somewhere...might have been the Mekons I think.
That reminds me to post the Drinking Electricity album.