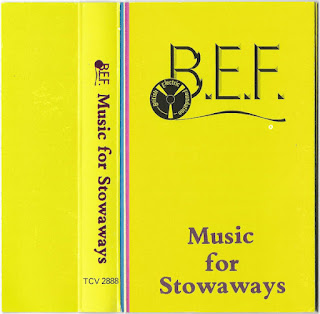 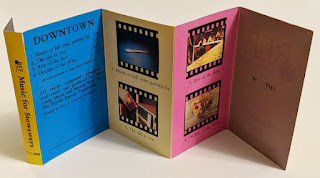 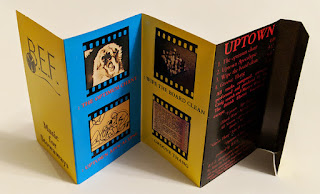 Retro-Futurism always requires an amount of outdated tech that was destined for the garbage can,and there was a lot of this in 1981.In this case a cassette only release of instrumental versions of future hits destined to be thrown into the garbage can,alongside the cassette, the 8-track Tape,DAT,Mini-Disc,and lately, the compact disc and any hope of getting subversive elements of the underground yoof culture regularly in the charts. I smell the stale whiff of a Bob Last influence going on here,and I 'm not wrong either;the Scottish Bernie Rhodes gets an executive producer and design credit on this luxurious cassette packaging featuring the other two in the original Human League. It's Heaven 17 before Heaven 17,minus the vocals,an old trick that Last tried with The Fire Engines to try and get the mug punter to buy the same songs twice. A trick adopted by those smashing chaps in the music industry by making your music reproduction system fashionably obsolete. Then endlessly reissuing the entire pre-1990 back catalog on Compact Disc,followed by the 'deluxe' editions, then the 'super-deluxe' version...and so on!
Thankfully,after many thousands of quid later, we have now realized that Vinyl was the superior product after all.40 minutes of anything is now recognised as 'enough',and the cassette was much more than just kitch,it was convenient!So now we are buying back all those records that we sold to buy the CD's! Not to mention the now hilarious fact that New Order once released a Mini-Disc only version of one of their insipid tunes!? ....although I can't laugh, I once shelled out £300 quid on a Portable Phillips Digital Compact Cassette(DCC) recorder, which was virtually obsolete before I got it home.....a bit like the British Electric Foundation actually.
Ian Craig Marsh,the 'hip' one, and Martyn Ware,the one who looked like he worked in a paper merchants office, thought they were the talent in the mark one version of the Human League;when actually none of them had any talent.....which is no bad thing I suppose considering the nature of most of the groups featured on these hallowed pages.....but they did have a promising idea to make pure electronic music that could conceivably get one into the British hit Parade. Trouble was, they had no idea how to make a tune...the exception of course being..."Being Boiled".If they had kept it like that there would have been no need to inflict "Don't You Want Me Baby" on an innocent planet.
Yeah, the Human League split up into the Human League mark 2, and the British Electric Foundation,or B.E.F. who obviously still hadn't any clue how to write a tune,so got laden with the task of making a bunch of pointless instrumentals, which evolved into making more cassettes with guest singers such as Billy MacKenzie and ...whoops....Gary Glitter,in their "Music Of Quality And Distinction"(no Irony involved) series;sadly also responsible for resurrecting the career of one Tina Turner,a crime only topped by their own Heaven 17 project which evolved out of all this noodling ,and a desperate need to out-do 1981's chart darlings,Phil Oakey's Human League.
Being an owner of the largely disappointing pre-split Human League oeuvre, i was hopeful that B.E.F. would flourish without their Front man and his distracting lop-sided barnet (Barnet Fair = 'Hair' in cockney-ese); but,although they must have had a hefty advance from Virgin,and spent it on every synth a young man could possibly buy in 1981,its a tad uninspired;but awash with the kind of analogue gloop and tang that could allow even Gary Glitter to make a come back.....well, maybe not? Although I do feel it's my responsibility to warn my loved and admired readership that this tape also includes some judicious and malicious use of a slap-bass!
One non-fictional weapon that has yet to be threatened upon the west by Vladimer Putin....once known as the Mark King of the KGB's in house white boy Funk outfit, "The Bass-Slappin' Slap heads". There was once a rumour that the USSR had a division of Stanley Clarke clones armed and ready with fretless basses to invade the Baltic states....thank Christ for our children that impending economic collapse and a certain Nuclear accident put paid to that despicable horror.
There is,however, intelligence that the Chechnyan Jaco Pastorious Fan club have mobilised and are approaching Donetsk as I type.Humanitarian corridors have been set up.
*****This ISN'T Fake News!*****
Tracklist:

Well, I quite liked a few of the songs on Heaven 17's Penthouse to Pavement. The Human League on the other hand never did that much for me. If we're talking about bands with silly hair I always preferred A Flock Of Seagulls over the Human League. Fell free to laugh at my lack of taste and good sense.

Yes Anon....but i am well known as a Flock Of Seagulls fan so I ain't gonna be deriding your impeccable taste anytime soon. Human league never had that x-factor,except for the odd fast product single.....preferred John Foxx & Gary Numan's take on electronic rock meself.....i think Kajagoogoo had the stupidest hair all round.

AFOS s/t was the first record I ever bought, and I stand by that one to this day. Though I certainly got some duds after that--it took me a few years to get my bearings. I "got my bearings" precisely three years later, one Saturday afternoon, when I picked up used copies ($1.99) of Henry Cow's Western Culture and Gong's Viva le Gong (this was late '80s--I obviously wasn't very "cool") and rushed home to watch The Avengers only to find it was a Tara King episode--fuck! So I listened to HCow and Gong and my mind was blown. Anyways, AFOS: remember all the pop stars who copied that hairstyle? Seriously, there's some live Hall and Oates footage on utube in which Daryl Hall has that exact style!

And what's wrong with Tara King?
Daryl Hall should be erased from the history of the planet just for that crime of dishonoring the Flock.
Of course my early years are littered by many audio faux pas' too numerous to mention.Mainly Glam first weird record was probably PiL's first,or Pop Group,or This Heat...will have to think on that one. You should be proud to boast of the debut from AFOS as your first time....Slade "Slayed"was mine first foray,not too bad i suppose?

Gary Numan was quite good and John Foxx too. In fact the first several John Foxx Ultravox records remain favorites to this day. I'd rate Systems Of Romance over some better known post-punk albums.

In the long running debate as to who was the first Post-Punk band, I have decided it was Ultravox mark 1...even before post punk was a thing.
If the Ramones can be Punk before Punk then Ultravox can be post-punk before...well you know the rest.

Tara King's fine, it's just that in my youf I didn't think that ladies should have short hair. And I'm not ashamed to admit that, even though I probably should be.

I found weird music relatively early thanks to this guy I was trading Yes and King Crimson bootlegs with. He had this seriously massive 20 page list of boots and after exhausting the typical prog crap I decided to check out the weirder stuff. Having such materials used to make one a "sought after individual" for certain types, then modems got faster and hard drives bigger and then, all of a sudden-like, it was all on utube. Very sad.

I'd sing Solitaire for the B.E.F
But who wants to be with them anyway