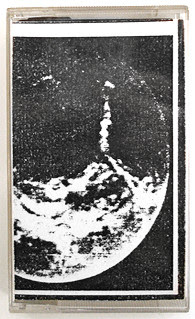 That looks like a badly Xeroxed image of the Earth rather than failed sun, and essentially Ring-less. gas giant, Jupiter. Hmmm? ....No Rings!?......Unlike Uranus (Haha..I had to aqueeze it in somewhere? So to speak phnar! phnar!)
I did mention in the previous Kelday post, that he has now left the building,and had taken up residency at Sun Ra's gaff among the resplendent rings of Saturn;but it now seems maybe I was wrong?
This French compilation of Kelday's work,compiled by the man himself,is a fitting epitaph indeed.Showcasing his unassuming cosmic abstractions like a warped copy of Tangerine Dream's Alpha-Centuri as reflected in a funhouse mirror.Lovingly benefiting from a severe lack of anything digital,except for human fingers pressing keys and twisting knobs.
Tracklist:
A1 Rings Of Jupiter (from PSI 1981)
A2 New Age Mutants (unreleased 1983)
A3 Short Stay In The Garden Of Optimism (from the compilation New Babel 1983)
B1 In The Air (from Centuries 1981)
B2 Birth Of Planestesimals  (from Another Time, Another Place 1982)
B3 Technofear (from the compilation "Organic Mind Workshop" 1984)

DOWNLOAD from Uranus HERE!
Posted by Jonny Zchivago at 12:44