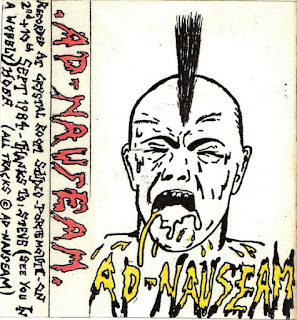 Ad Nauseam, from Portsmouth(keep that quiet!),were one of those generic UK82 hardcore bands who wanted to be Discharge,but were four years too late,so now they had to lessen their ambitions by just wanting to be the Exploited, mohawks and simplistic politics included.
To their credit, some attempt has been made since their earlier recordings, to 'progress' in some way.
There'a mixture of Hardcore styles on display here,if its possible to register any discernible difference whatsoever between the lot of 'em, apart from the fact that some of 'em play it better than the others.... maybe?
This tape has sections of Yobbed-up US Hardcore,a bit of D-Beat,lots of UK82 street Oi and even a melodious track (i suspect the beginning of track 2 was nicked from Fripp and Eno is it not? Closet sophisticates or wot?).All fronted by a potty-mouthed 'Wattie' clone.
Fripp,Eno and Wattie.....still waiting for that one.
As much as I enjoy the music(?),for want of a better word, I find the lifestyle these leather clad hooligans lead,a tad nauseating,hence the name, claustrophobic,and more than a tad depressing.If i wanted to join the army or a cult there are better options,mainly a cult with a higher ratio of girls to boys for a start.Is there a tastefully dressed hardcore punk sex cult out there? The Davidians of Waco had a suitable PA system,it just needed some decent music to be played over it rather than just David "I'm Jesus me honest" Koresh. The group could have played as the building burned down,and out-done G.G. Allin,for one night only.
I would hazard a guess that the various members of Ad Nauseam,still dress like that,with receding mohawk hair cuts.....quite like "Wattie" himself,who, several heart attacks later is still the epitome of UK82 hardcore Punk from the British Isles.Now roundly exported to all corners of the known planet
That's entertainment?
Tracklist:
1 No Mercy
2 Undeclared Citizens
3 Who Are You
4 Wheelies One
5 Nausea
6 Destructadisc
7 Throw Down Your Crutches
8 Dog Od On A Sunstroke Pill
9 The Church Creates
10 Still Be Havin Fun
11 Monkey See Monkey Do
12 Ain't Gonna Be No Peace
DOWNLOAD the cult of nausea82 HERE!
Posted by Jonny Zchivago at 11:01

Saw Exploited in late 2019, just before the Covid.
Touching Wattie's hand, in a 40 years (too) late 'young punk' moment, gave him a... discharge of electrostatic energy, he turned to me with wide open eyes, lol.
Well, he was quite C-filled, I think.

Thank you for this tape.

I will admit to seeing The Exploited in Montpellier,in about 2010-ish.Didn't get to touch his hand...why would I? I was too busy defending myself from the audience. Blood flying everywhere. I had to push away an endless supply of fat punx with mohicans,and one of them was flying in mid air heading in my direction,so i boosted him into the wall....unconscious.Felt a bit guilty about that,but not much. I can't abide Punx....fuck me there's several YouTube clip's of this very concert:

Funny thing that I never saw them live.... Back in the early 90's, if they played somewhere in Holland they would come to The Rhythm, the cafe in Rotterdam I was working at, no matter how far the drive was, they would come and drink and hang out with all the crazies there. Not a bad lot... But by God, how I hated all those "fellow" punks shouting Barmy Army and their silly red "punk pants" back around 1980 or so... I remember liking one song from them, Cop Cars I think it was titled, for the rest it just wasn't my thing, '77, '78, '79 etc. was behind me and I was starting to discover other stuff....This Heat, Metabolist, James White, Blurt etc. ....

Indeed Henk, Punk for me was about being an individual and moving,nor necessarily forward,but at least sideways....like This Heat etc....for the 'Punx',it was all about staying the same,desperatley grasping hold of their youth moment for ever.Sad.....The Exploited were a cartoon,if Punk wasn't dead by the time "Punks Not Dead" came out then they fucking killed it.
Still,its fun to watch from a distance ,especially as Wattie is even older than me.

What band shouted, "If the kids were united. They'd throw bricks at Jimmy Pursey?" Anyway, I did like some Sham 69 and Angelic Upstarts, but by the time oi! got going I'd checked out.

That would be the great Danny and the Dressmakers...the entire works of which can be found Here, on Die Or DIY?..if you do a search. I still sing-a-long to Sham 69's first couple of Lp's, and the Upstarts had a couple of fine tunes too.Superbly Stupid stuff,with terrible politics.....indeed...Oi....i was off too.

the guitar player of ad nauseam passed away in 2018 i thought i would make a comment about the the band since all the comments are about the exploited and not ad nauseam who are much better than the exploited.sham 69 and angelic upstarts had great politics they both took a stand against racism doesn't sound like terrible politics to me.

this and the mass murder got pressed on to vinly Ad Nauseam – Once Upon A Time.... 1982 / 1984 Vomitopunkrock Records was kind enough to press it i enjoy the simplicity of there sound.

As opposed to that "complex" Punk sound?