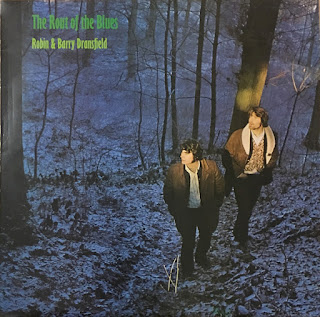 I noticed that the posting, previously, of some cassette kulture euro-Industrial led to a sharp upsurge in blog traffic, possibly due to a mention of  the blog's favourite fat idiot over at Vinyl On Demand,or, even sadder, that you lot out there can't get enough formulaic Industrial skronk ,that if i posted the same cassette over and over again,you'd download it again and again until you ate yourselves.
A happier tone seems to have been struck by a few complaints that i have forsaken my recent Folk direction deliberately to pursue viewing figures by giving them what they want?.......Nah!
Here's Yorkshire's 1970 version of The Proclaimers,but with two handsome farmer types replacing the rather unattractive geeky twosome, and with far less shouty spittle involved.
The cover photo does look like the Dransfields are looking around the site of the male rape scene with the Trump voters from  John Boorman's "Deliverance"....after all events like that are what most Folk tunes are written about.Subject matter rarely touched upon by the mainstream rock and punk bores.
1970/71 could well turn out to be the best years for music ever.....even Yes were good then for chrissakes!?
But what about the Punk Rock the aging Ramones shirted punx whine?....this stuff IS Punk Rock! Besides that you proto punk bores are always inventing new bands who were the first Punks before Punk every bloody week,so you should be happy in 1971...especially when you discover that there were actually no,zero, Punk bands in 1971 (pretty much like 1976 in fact)......and don't yee come back with Iggy effing Pop , the rocking dwarf. Pleeeeeze!
The real underground was the Folk scene.No-one bought the records, but they carried on oblivious of the global indifference.Even shunning electrical instrumentation.
So here we have the Dransfields giving it their all with a mixture of self-penned and traditional tunes, given a cutting edge by Barry's barely disciplined fiddle scraping.
I should have saved this for this coming Saturday's F.A. Cup final, in which I am expecting, nay demand, a Rout of the Blues by my beloved Leicester City...the Blues being the arrogant and Russian Oligarch financed Chelsea.
Like Rock and Punk music, Football used to be property of the common man,but the rich have stolen it,as they have Rock music;but Folk is still with us,and could never be bought by Russian blood money. Hopefully we can get the other stuff back one day; but not using the VOD method of selling it back to us in unaffordable over elaborate box sets with shite artwork,to display but not play.
Here,the music will remain free,so we can reclaim the notes without feeding the phat cats,or the fat twats.
Tracklist:

1.The Rout Of The Blues
2.Scarborough Fair
3.English Medley
St. Clement's Jig
The Huntsmans Chorus
Nancy
4.The Waters Of Tyne
5.The Earl Of Totnes
6.Tapestry
7.The Trees They Do Grow High
8.A Week Before Easter
9.A Fair Maid Walking All In Her Garden
10.Who's The Fool Now
DOWNLOAD from the internet's rout 666 HERE
Posted by Jonny Zchivago at 12:26

Fat cats eh? Judging by the amount of music you seem to be familiar with (I mean who has that much time?)and the multi-paragraph posts you’ve been writing most every day or so for years, I’d say you no work? If you do work then maybe, no friends? I mean so much time and effort for music? Music that you don’t even as you say, like? What’s the point then. Also where do you get all this music from? Soulseek? I mean do you have the actual artifacts of all this music or are you just digitally literate? Not a judgement call or anything, just curious how someone can have that much knowledge about so much music and maintain a life outside the “Blog”. I ask this because I too have an extensive music collection, but I have time for friends and did have time for a job until I finished that er, sentence. This is not “feud” talk, as another poster suggested, but rather a sociologic curiosity for a blogger that I frequent because I do learn things and agree perhaps politically with you on some things. But really, The Rout of The Blues, by two fuckin white guys? Please, at least the industrial pretence is cartoon like, unlike this cultural appropriation debacle.

Oh, so two white guys aren't allowed to have anything to do with The Blues? Are you 'Woke' or something equally vomit inducing?
I suggest the Blues in question may have something to do with emotion rather than black american song forms. Lead belly after all sang many an english folk song...ask Martin Carthy and chums.
I'm working on having no friends,worked on having no wife,she left, and more importantly have ambitions to have no job...my job is clearly advertised in the margins...or it should be anyway.
I have Aspergers so everything you suggested fits the symptoms perfectly.
Agreed there's not enough time in the day. I do however, enjoy doing it.
As i always say 'Never Explain Your art'...i shall curtail this reply pronto....mainly because Leicester City are on the telly in half an hour.

Will you be my friend?(said in childlike voice) Lol!
Have you seen Tex Avery's Lonesome Lenny also called Lonesome George...that's a bit like me.

It's not too often you post something I have on vinyl, but this is one of them! And it's been ages since I've listened to it. "Blues" in this context has nothing to do with any musical form, it's a military outfit in uniform, presumably blue. And "Rout" certainly doesn't signify here what we mean by it today, a panicky retreat! Instead, they're apparently marching in review for their friends and relatives, before they get shipped off to go shoot somebody else.

There you go 'Unknown' that's told you innit?...thank you mandolinny for your superior knowledge.

well I for one am having a whale of a time listening to these 70s folk LPs. Must be my bagpuss upbringing. Cheers Jonny

@ mat k ....yeah, i was brainwashed by the beeb as a youth.When Bagpuss yawned I was instantaneously a folk Music fan.

I discovered Barry Dransfield's music many years ago thanks to a single attached to the fanzine Ptolemaic Terrascope and since then everything I have discovered is beautiful, like this great album. Thank you!

Told me what? That you have racist and homophobic tendencies? Yep, sure did.

@ unknown....whoever told you that was exactly correct....but i do fancy Barry.