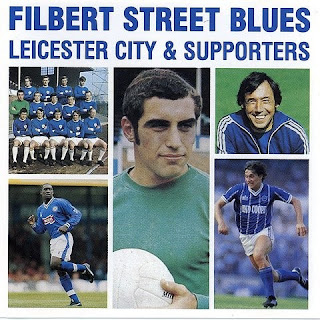 Well, i've just about recovered enough now from the revelries of yesterday's F.A. Cup final victory for my beloved Foxes.So as my hangover fades I will inflict this collection of Leicester City themed aural atrocities.
These 19 tracks are from a time when supporting the foxes was a kind of masochistic torture. There were brief moments of joy, but it was largely pain,frustration and disappointment. A lot of these songs ,seemed, at the time to be overoptimistic and unrealistic;but nowadays,the lyrics of all these tunes seem to have come true.
Suddenly those ill-advised tuesday evening round trips to Middlesbrough to watch our footy team lose seem worthwhile.
What a fucking goal!!!!!(click to relive the magic HERE!)
I could spend the rest of this post slagging off the so-called big boys,but frankly they ain't worth it;just listen to Chelsea fans moaning about handballs, offsides, and how we were lucky....as in they didn't win so the other lot must have been lucky...pathetic.
Leicester are the peoples team,rather than a Russian Oligarchs plaything. Moan all you like and wish your millions could buy a goal like that screamer.....
We also have players who are brave enough to show support for Palestine as they collected their medals
This also gives me a chance to plug my much praised compilation in Tribute to Leicester City for winning the Premier League in 2016. This one has lots of local groups,rather than a bunch of dodgy fans.
And a much more in depth analysis of what it means to support an 'unfashionable',read as 'Not Rich', football club in England: Click this......

"Dilly Ding Dilly Dong: No-one Listened To Our Songs (a Die or DIY tribute to Leicester City FC) " - (a DIE or DIY? mixtape No.9)

Here's the tracklist for Filbert Street Blues,including a tune that's on both of these tribute albums,the prophetically named "This is the Season For Leicester", the the 1974 squad....produced by Trevor Horn of Buggles fame nonetheless!?
Tracklisting:
1 This Is The Season For Us
by Leicester City F.C. 1974 1:37

3 Champions
by The Leicester Lads 3:33

4 Post Horn Gallop
by The Band Of the Royal Marines 1:53

10 Wembley Roar
by Kev Price and the City Strikers 3:49

17 Frank Worthington
by The Joe Jordanaires 2:22

18 Leicester Boys
by Kev Price and the City Strikers 2:42

19 We're Back Where We Belong
by Ray Nardfox 3:23
DOWNLOAD from the home of the blues HERE!
Posted by Jonny Zchivago at 22:16

I always enjoy reading your scree and watched the Cup Final yesterday. I took great delight in your victory and felt a sense of guilt that my team had denied you victory in your last FA Cup final in 1969. We also won 1-0 that day thanks to a goal from Neil Young who was obviously considering his options: stay in professional football or make a go of things with David, Graham and Stephen. Congatulations. We're all Foxes this weekend.

Indeed Mr Oldham sir, it was an us against them final, Leicester represented everyone else against the bastards in the so-called 'Big-six'!
I have no problem with the 69 defeat,all the clubs were virtually on the same level financially back them,'twas about football rather than business.Not so long ago Blackburn Rovers were the richest club in the uk remember...where are they now?....answer; their benefactor died.
Neil Young went on the make 'Trans' I believe,and several other much worse records....like that rock'n'roll one.

"Trans", Mr Young's stab at being Kraftwerk (which is German for Kraft Cheese). Who knew, back in 1969, that his best years were behind him?

Phantom Of The Rock Opera said...

PS Alan Woollett worked for me as a driverc back in the 1980's His stories about the 69 final were great stuff.

I just learned that Frank der Vank of VOD is planning to release some sort of 20 LP Sutcliffe Jugend mega box-set, affordable to Jeff Bezos, Elon Musk and Bill Gates only. We can't let that pass without comment now can we?

Dear Fred, for a famed mass killer like yourself this 20LP set will be ripped and made available for free within a week of its release..just remind me.
And there's one for Rose too if you want?
There won't be anything on it we ain't heard before anyway...most of it will be "We Spit On Their Graves"..available for download on here.....i'd order it myself but i think he'll spot its me and reject my hard earned 200 euro's just to spite me.

I know (and care) absolutely zilch about UK football. But man, Mike Alway knew how to put these together, packaging wise. When they got reissued at some point with really tacky, godawful covers it was a damn shame. Some people just don't get it.