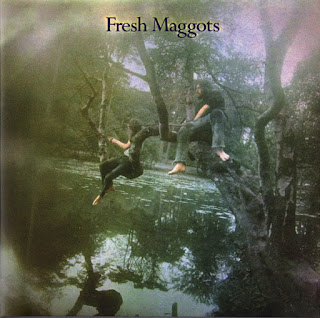 It wasn't the Punx who first sang about life on the Dole (unemployment Benefit) apparently?Among a lot of other traits that they shared with earlier times,like all those ridiculous 'Punk before Punk' groups that get discovered everyday,just to put that to bed,Punk Rock only existed when it had a name,which was basically all it was about musically,but there were some good clothes at least;unlike the Hippies. Two of which can be heard on this sunk without trace Psychedelic Folk monster from 1971,singing about The Dole...among other topics, including anti-war and anti-monarchy tunes.
This Nuneaton#(UK) based pair  obviously heard The Incredible String Band,and Donovan,and realised just a couple of acoustic guitars and a penny whistle could possibly get them on the Hippie Folk bandwagon,and maybe, able to sign off the Dole? This may have occurred, but by 1972 they were back on the Dole after failing to shift enough units to make a second album economically viable..... a familiar tale.
#The Home town of the great Larry Grayson if anyone's interested.So its very possible that the good Larry would have heard Fresh Maggots at some point while walking up and down Nuneaton high street.I can just imagine he,Slack Alice, Non-Stick Nell,Apricot Lil and Once a Week Nora, standing at the back of the hall while the Maggots were going off on one. Any late comers would have been swiftly advised to "Shut that Door!"......just don't tell Everard for christs sake!
Ooooh look at the muck in 'ere!
Tracklist: