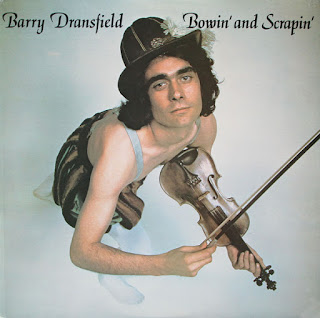 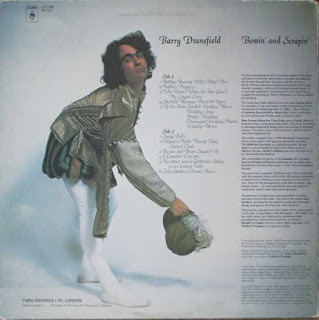 Rumour has it that Barry Dransfield's fiddle bow was beefed up by strands of Barry's own eyebrow hair liberated by some handy wire-cutters,which adds that extra raspiness so characteristic of Barry's solo fiddle style. I suspect that Dave Swarbrick did the same thing, but this time using his ample sideburn hair.?
All the secret age old techniques of Folk music are being brought into the light here, so one must curtail these revelations pronto or risk a visit from a fuming Green Man with wood on,looking for sexual recompense of the type as described in "Recitation Upon A Gentleman Sitting On A Cremona Violin".
Although Barry's youthful looks as pictured on his first solo album had waned somewhat by 1978.This has to be the best album cover in the vast Topic Records catalogue. Which isn't saying too much,as most of 'em are bloody terrible.Here we have a police helicopters view of Barry's piercing eyes framed by the famed eyebrows,handling that fiddle like a freshly sheered sheep's arse.
The back cover has our second favorite fiddler doffing his cap in an unsettlingly Russell Brand-like pose,but with a better hairstyle than the self-styled Che Guevara of Hampstead,or Citizen Smith of Beverly Hills when he's on set in Hollywood.
But when Barry's a-fiddling he, the hideous spectre of ex-junkie stand up joker Brand,disappears like a mirage in a desert of forgotten folk reissues.
Tracklist:

The Link is down - any chance of a re-up?

its nOT DOWN, TRY TO DOWNLOAD AGAIN...WITH MEDIAFIRE....you have to try a few times so they can direct you to amazon....usually twice works.