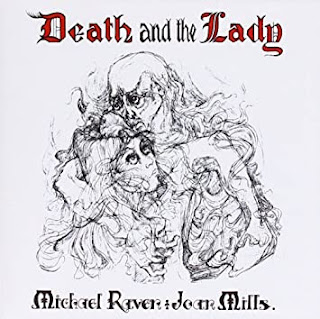 Well the tenuous connection between me getting Pfizered today and some twilit english folk moozick,is this sought after LP by Michael Raven and Joan Mills."Death and The Lady"
Death being the looming shadow of Co-Vid 19,and the lady being the charming young nurse who penetrated my left arm with the serum.
A liquid which, depending on which facebook post you last read instead of watching responsible news channels, or reading serious newspapers, will either render you a screaming vegetable as part some some fiendish genetic experiment, or turn you into a political zombie working for the Illuminati (Aren't we already?). There are many others that I can't be fucking bothered to list,but I do suspect,I'm crazy i know, that there wasn't any nano-bots or nano chips shot into my body, and the planet Earth is definitely elliptical rather than Flat.I know this because I can't see Australia,or at least the Himalayas from my nearest hillock.
Anyway, I've took one for the team to help free us all,even the Anti-vaxxers and conspiracy nuts, from this absurd repression......not that i've minded it at all.It kept people away from my front door,business increased by 500% due to the online boom,and i don't have to go anywhere.....look, I've got the photo's,so whats the point?
As lockdown is being lifted,and bars are opening, at least in the UK, I'm waiting for the anti-vaxxers to become the dominant breeding ground for super-covid,as the virus works out how to avoid the immune system altogether and become 100% lethal.My dearest wish is that it kills the Anti-Vaxxers in horrible slow agony before it gets to us responsible adult types.Dying will be worth it knowing that these post-truther fools got a free crash course in immunology before they realised that they just might have been....er,silly I know but.... wrong???....can't be?...nah?
"Do your Research" they said? Meaning watch some basket-case with a self-importance deficiency on YouTube,rather than doing 6 years at university studying immunology and/or virology.Duh!
However..... this album is rather mid-budget Pentangly, but worth the price of admission for the fact that Michael raven looked like a bald Frank Farley of the Pirates ,and sometimes like Roger Whittaker crossed with the Sweeney......sorry anyone not from the noisy island of Britain,I just can't help myself using Brit-culture references,it amuses me.
Joan mills has a nice line in delightfully dark(-ish) warbling,but tends to overdo it a bit.She so wanted to be Jacqui McShee (Pentangle),and almost pulled it off. But one cannot fault the quality of these songs.....the guitar playing, although very BBC schools program theme tune style is suitably haunting!......OUCH!...those nano-bots are starting to take over, I must kill,Kill KILL all non believers!
I predict the new 100% lethal'Super-Covid' will hit round about the end of the holiday season(sept).....and there'll be No escape....not even for Bo-Jo bless him,as he'll miss being voted the worst Prime Minister that ever got to redecorate the Downing Street Flat 'cus he'll be dead!
Tracklist:

cheers for all the folk posts - keep them coming