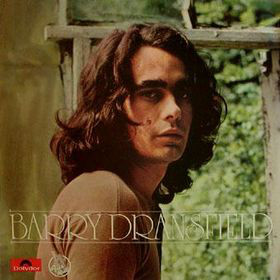 Once voted thee most expensive Folk album on da planet,f-king hell, it costs even more than anything on elitest re-issue label Vinyl On Demand!!!? But infinitely better value for money music wise,in the fact that it is actually 'Music'. The more talented Dransfield brother, Barry, garnered himself a major label one album deal. with kraut label Polydor. Label mates with James Last was something to keep quite down at the Folk Club at the local pub.
It is,however a great piece of authentic contemporary folk art,made and played by the owner of the densest set of eyebrows this side of Chris de Burgh.I think I may have a man crush goin' on here?....no not De Burgh! Dransfield, B.
Of course it sank like the Titanic,with the Dransfields' ancestors trapped beneath decks in steerage ,such be the role of the working classes.Die in wars, die in factories, die in pits,die in luxury liner disasters. Not sure if there are any folk tunes about the Titanic....one must do some research, proper research, not the type of 'research'(ie watching you-tube video's by nutters) that anti-vaxxers and relatives always accuse your scribe of not doing.
Anyone know of any?
Tracklist:

A1 The Werewolf
A2 Be My Friend
A3 Jigs: Hyde Park Mansions / Irish Jig
A4 She's Like A Swallow
A5 Broken Barricades
A6 Girl Of Dances
B1 Lots Of Little Soldiers
B2 Lily's Ballade
B3 Reels: The Trip To Derrow / The Traveller / St. Anne's Reel
B4 Robin Hood And The Peddlar
B5 General Worthington
DOWNLOAD from steerage HERE!
Posted by Jonny Zchivago at 14:23

@ Shug...His looks are smoldering in the cover photo...but I would love to know his grooming method for those brows? Angle Grinder perhaps? Blowtorch and pliers!...I must stop, I'm having inappropriate thoughts again!
Yeah Nick Drake looked a bit like he smells,it was the greasy hair...now Barry's flowing locks,obviously a conditioner has been used...not very Folk like behaviour I must add.

Jamie Brockett??? did he go down with the third class scumbags?

Jonny; You're right about those eyebrows. Didn't folkies use woad or other plant-based eye cosmetics?

@ Shug...True folkies used raw plutonium for vaporizing facial hair. Not quite natural,but derived from natural Uranium, so that's ok down the club.

How's about "Titanic Blues" by Columbus, Ohio legends the Bassholes, originally by "Hi" Henry Brown circa 19 and 32... https://www.youtube.com/watch?v=0X39kn4gXc0

tOP MARKS NTROMLEY....i might have guessed some obscure bluesman would have a tune about The Titanic disaster. Nice one....i guess ths groups name is pronounce basss rather than base...Holes?...is there a group called the F-Holes?...if not, there should be.

indeed, rhymes with "assholes"... great band, kinda the Suicide of garage punk in terms of bleakness, which seemed to increase with each record instead of the typical trajectory of mellowing with time. and uncoincidentally this album features an Alan Vega cover...