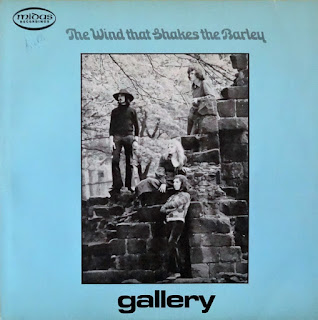 On the aptly named Midas label.Anyone who touches this turns it into gold.Fetching up to a grand for this Folk Wave long missing pastel blue progressive folk rarity.
A lot of these independent releases seemed to go for the pastel shade jacket around 1972 to '76.....obviously it was either cheap,or it was a take it or leave it situation.
Of course, I don't own an original copy.If I did it'd be straight to eBay. However, as with most bands from rediscovered genres, it got a re-released version,adding some bonus home-recordings, which are included here for all you rabid Gallery-ettes out there...of which I'm sure there are dozens?
Tracklist:

Getting ye old crappy ""The Baron of Brackley" by Gallery may be available for download from Amazon" meaasge...........

Try it more than once...the second go usually gets you to the download...its mediafires way of stealthy advertising.