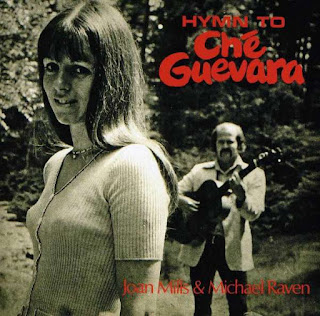 There aren't too many openly conservative Folkies. They're all looney left wing, unless you count Johnny Cash as Folk? Well at least in the UK, all Folk musicians were proud exponents in sucking the red end of the political spectrum. Michael Raven may well have the deportment of an off duty Police officer,but his recording career suggested that he was somewhat a frustrated Pinko. Firmly out of the closet by 1974,the title of this crime worshiping album kind of confirms a revolutionary bent.
Making a record in praise of Ché ,a terrorist by modern standards,quite possibly a war criminal by any code of contemporary civilised ethics, and very guilty of crimes against humanity for his role as Minister of Justice in Castro's early government.'Justice' meaning executing enemies of the people,aka, anyone they didn't like.
Very popular on T-shirts,crowned the sixties Jesus, Ché,was more a fashion token rather than someone to base a new world order on. Somehow I can't imagine Joan and Michael having an in depth discussion about Ché's concept of the 'New Man' and the collectivization of farmlands.....saying that ,however, he looked good,and if you have a cool image, crimes against humanity don't count for diddly-squat.
I can just imagine these gentle folkies turning into blood thirsty killers come the revolution, hacking that doom metal fan next door into pieces with a scythe at the slightest wink from the latest Ché-a-like @ Facebook.com. Human's have a track record of stuff like this.
Depending on the blugeoner of course, I wouldn't mind being bludgeoned to death by an acoustic twelve string if it was wielded by Sandy Denny's resurrected ghost......as long as it was in tune mind!
That said, if the would be bludgeoner was some faux-folkie like James "You're Beaudiful" Blunt,or that Ginger twat from X-Factor,then I would willingly surrender my liberty,or even my life, to render them harmless with a couple of lead lined mandolin's.
Raven and Mills, seem to enjoy singing about criminals in general it seems,because of the misconception that all criminals are the hard done by working class lads'n'lasses featured in many a traditional tune.Or was Raven really a plain clothes policeman after all?
Tracklist:

"that Ginger twat from X-Factor"

Never ever got the ginger-hating thing (and no, I'm not one myself) though if he'd been on X Factor I can see how one might default to this received posture. Mind you, picking on a particular X fucker...you may as well single out a particular Sparrow for cursing from a thronged garden of the buggers.

This looks very good indeed, esp the glaringly undercover Tosh-Burnside-like copper who was presumably a Special Branch mole in the Red networks as they marched for a statue of Myra Hindley to be erected. Wonder how old the sprog he doubtless impregnated the unsuspecting folkie-Vanessa with is now?

Re conservative folkies - try 'Freedom Is A Hammer' on Omni Recordings.

Not a ginger hater, I have a ginger cat called Denzil, as a tongue in cheek tribute to the black actor, so i'm not racist either then.....I just hate everyone,everything and myself....you should try it, it's no end of fun teasing out the self justified righteousness of the modern human.