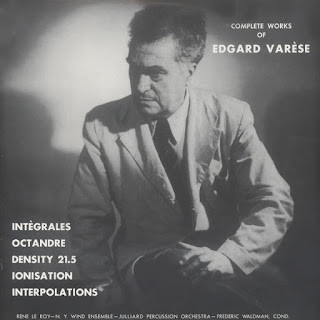 Edgard Varèse has been credited as the "Father of Electronic Music",probably by himself. There's a clear behavioural pattern among artists,especially classical composers, to control events with zero wriggle room. They either long to be either dictators or composers.They are the large pulsating brain in the centre of the orchestra.If they could not do this they would regularly crop up in the extreme ends of the Political spectrum,the number one destination for the failed artist.As they cannot legally control people any other way than they could a triangle player in a symphony Orchestra,sadistically allowing him just one note,then woe betide you if you got it a nanosecond out of place. I'm sure that if Artists weren't given their medium to ejaculate their need for control they would vent their anger in the form of some attempt at doing Genocide properly,and this time 'no more mr Nice Guy!

"I Long for instruments(read instruments as people) obedient to my thought and whim, with their contribution of a whole new world of unsuspected sounds, which will lend themselves to the exigencies of my inner rhythm." Varèse said in June 1917,obviously his mind was with the millions of young men being slaughtered on a small strip of land in north-eastern France at the time?

As for the 'Father of Electronics' title, i would suggest there are far more worthy and earlier pretenders to the throne than Varèse,but all those Frank Zappa fans grasping over every word their hero said,won't have it any other way....Frank liked Edgard,that's all you need to know.
Ed had been hoping for using some electrical devices in his music since the twenties,composing a piece for two Theremins and voice.Then, with electronic music at last a real possibility owing to the development of the tape recorder, Varèse produced Déserts for wind, percussion and tape (1954) and Poème Électronique (1957-8), devised to be diffused,very influentially, in the Philips pavilion at the Brussels Exposition of 1958.

His non-electronic pieces, have a tendancy to sound like a bucking mule in an empty kitchen...with police siren of course.....I told you he was wacky? There are other pieces that sound not unlike the Car Horn factory that Laurel and Hardy worked in in "Saps At Sea".....horns....HORNS.....HOOOOORRRRRNNNNNSSSSS!.....after hearing this you too will need rest and plenty of sea air just like Oliver Norville Hardy was recommended by his physician.


The more trad avant-garde works on this album were recorded in New York City in 1950,taken from the original mono master tapes, except 'Interpolations' which are in stereo,and recorded in 1954.'Interpolations' are 'organized sound' compositions on magnetic tape, realized in the studios of the highfalutin Groupe de Musique Concrète,Paris.This is was that french roman nose was evolved for,to look down on 'us' along.

The original album didn't have the more Musique Concrete/electronic numbers on it, so I took the liberty of adding them, in their original, done by Edgard himself versions......so all you Zappa fans can rest easy.

DOWNLOAD a little electronics and a whole lotta HORNS HERE"
Posted by Jonny Zchivago at 23:18

Thank you. To many people of a certain age (Zappa and myself) the EMS recording of Varese was just about the only way to hear Varese. I went to an all-Varese concert at Carnegie Hall, which was half filled, if that, and I had the program autographed by Varese. So thank you for this.

This album (the original 1951 release on EMS) is notorious among Zappaphiles for being the first LP Zappa ever bought, and obviously the one that turned him on to Varese. The original LP contained only the mono instrumental recordings (less than 15 minutes per side for optimal fidelity). The Interpolations from Deserts were added on the Finnadar release (that's that wacky vanity label run by the Atlantic staff producer Ilhan Mimaroglu, who was also an electronic composer); besides that, the Finnadar release also includes in its liner notes the article Zappa wrote about how he found that album in a record store in the big city and thought it was cool that somebody put a mad scientist on record. You probably know this already, but the whole of Deserts is four orchestral bits separated by three bits of tape, and these are the tape bits. But what you may not know is that Varese redid the tape parts later, when he had access to the better gear at the Columbia-Princeton Electronic Music Center, and when Deserts gets performed or recorded nowadays, they prefer to use the updated tapes. As an aficionado, Mimaroglu felt that the original tapes should still be available.

Back when I was first trying to find out about this stuff, I found the Varese (double) Album by Robert Craft on Columbia, which had most of Varese's catalog, and then there turned out to be another single LP on Vanguard that contained everything omitted from Craft's record that I could find out about in the pre-Internet age. I barely remember that record (although I still have it); those pieces just weren't as compelling, and there were a lot of silly vocals.