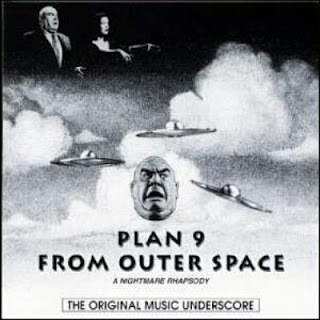 Here we have DIY cinema at its very zenith on a lavish budget of precisely  Fuck all. (watch it HERE!)
Edward D. Wood Jr's anti-nuclear masterpiece, and Bela Lugosi's final nail in his coffin...literally.
Now you can recreate all that amazing dialogue with the backing music, which Ed got from some cheapo Hollywood music library. Quite a few bits of this soundtrack turn up elsewhere in the Hollywood dumpster.For example, the Plan 9 main theme pops up in that other schlocksploitation movie "The Wild Women Of Wongo".....another DIY movie of impressive incompetence.
The 'Main Theme' was written by ex-BBC employee, Trevor Duncan.Who left the BBC the year Daphne Oram arrived, to earn more money in Hollywood,but,in the process,become totally forgotten.
As Delia Derbyshire made the immortal "Dr Who Theme" at the BBC, at least Trev wrote the  Theme to 'Plan 9 From Outer Space'?.....apparently this fact was not engraved upon his tombstone,a glaring error on a not too unremarkable CV.

Mega = YUK or AWWW, FUCK!
nevertheless, thanks for all your efforts, JZ.

Sorry, but I'm running out of places to put all this stuff. I've had this mega account for about 7 years,and its got 50 gb's of free storage, so i's gonna use it.

What's the issue with MEGA? Works fine for me.

No probs w/MEGA here either. Use up the free. Maybe I should start using it. Does it let you see how many times a file is downloaded? That's one thing I like about Mediafire. l'm told G-drive used to, but not now.

Name another movie with a recurring cut to a trumpet, suspended by fishing line and gently rocking back and forth, blaring for no reason.

Mega very good,encrypted too, so no outside interference possible....but...No download stats.....I have three full Mediafire accounts,for the sole reason that they provide download stats.Even though they deleted me once before,I forgive them for that reason.

Is that a challenge Ian?...or are you suggesting that Plan 9 is even more unique than we first thought?

Mega will often boot you offline while trying to download. I don't know what it is that makes that happen, but I've heard and seen many other people say the same thing, so I know it's not just me.

On the upside, since you tend to not post FLAC stuff, the chance of it happening is smaller, since the files are smaller and they come down faster. But IMO, it's still pretty user-unfriendly on the DL side compared to most others.

Anyway - I have this theory that we're less than two years away from this entire "golden era" coming to a close. There was that brief slowdown/blip right after that big Mega bust in - whenever that was. But I think all these free options are going to hit the wall soon, and something new - maybe - will take over. It's been nice while it lasted, though. I have enough salted away at this point to - literally - last me the rest of my life, and probably still not get to it all. The worst of time, the best of times...

@Jonny Zchivago: Not a challenge. The uniqueness angle. With he-man doses of LSD.

You seem to have misunderstood. I'm not talking about anybody "stopping" anything. I'm talking about providers deciding to do away with the free option. Frankly, I'm surprised they've kept it going as long as they have.