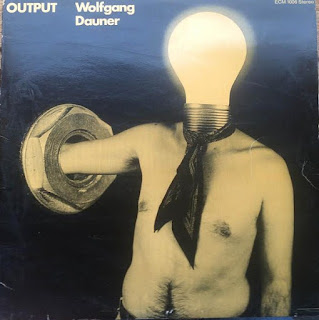 As well as being great to be left hanging around in your batchelor pad,even if your are a forty year old batchelor whom no sane woman would want to be in the same room as,never mind be intimate with; "Jazz" can go so wrong that it's right. As Howard Moon explained so succinctly in 'The Mighty Boosh':
"Yeah you fear jazz!
You fear the lack of rules, the lack of boundaries. Oooh! It’s a fence! No, it’s soft! Ahh, what’s happening? The shapes! The chaos! Has to be simple little nursery rhymes for you, huh? Simple little “dee dee dee de dee-dee.” Soon as the melody gets abstract you mess your trousers and run to your mommy."
In fact, the boudaries are so stretched here that the word Jazz becomes just a meaningless blurry blotch on the outer spiral arm of just one of a billion billion galaxies,or, in fact, just over there for those of us us who nearly understand this raw juju....everyone and no-one!?
As the cover 'art' suggests, just plug yerself into the PA and let the ideas flow channeled from the ether in the vast untapped vat of Dark Knowledge that makes up for 95% of the Dark energy in the known universe.Even Quantum computers can't calculate the exact volume and location of this dark force that is splitting the universe asunder.
The corpulent torso with dense crabs ladder adorned by groovey neck-a-chief, reveals the location of the Earth end of this rip in the space-time continuum as being cold war era West Germany;briefly world leaders for music this 'out', until "Future Days" in 1973 normalised it all.
The 'Output' seems to be an intriguing alloy of Prog,Jazz, and spontaneous improv direct from the source that is tearing reality apart.Kraut-Fusion has been volunteered as a category for those of us who feel comfortable on solid ground.

DOWNLOAD to input the output HERE!
Posted by Jonny Zchivago at 10:07

The whole thing is, we whitish folk had to find an intellectually
tight way to get back to the start. If you listen to howlin' wolf's version of smokestack lightning it does all those things. It's repetitive, yet open. His whoo-hoo's seem to come randomly. There is no chorus. It's a loop that's always morphing a bit. And the vintage recording is nice and phat. But nobody is playing the conventional "school of rock" way, that makes everyone sound the same.
These jazz rock things start to approach it again. Rolling Stone by Terje Rypdal. Love-Love by Julian Priester. ooh, like Michael Hoenig said "repetition is the image of eternity in music". Not that it matters. Just more of the hogwash needed to relax us enough to attempt a smokestack lightning.

So this is why I couldn't get a date back in the day? Blimey. Between the shirtless man with an arm inserted through a nut suspended in the void and a lightbulb head, to the odd blurps and bleeps on the record and some guy asking If I had a can opener so he could open the sky, this album was the cat's arse as far as I was concerned. You couldn't depend on anything except drawerbleakfickerdoodedo, wacked and unconcerned about it at all. I figured I'd be a big Dauner fan, but none of his others came close to this one. Most of his 'fusion/pop' stuff just fell flat to my opinionated, never so humble ears.

This is a monster date, cover and all, which if ECM were to reissue it (it seems to be disowned) would likely get some ghastly tasteful monochrome cityscape on its kisser.

The Jazz counterpart of the first Kraftwerk LP.