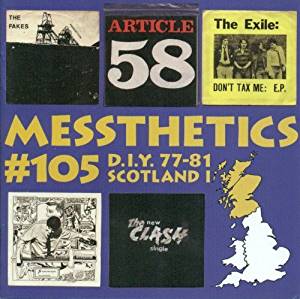 Sorry, No Deacon Blue here.
It's the Messthetics Scotland compilation innit?
Its got all the classics on here, The Fakes, The Exile,He's Dead Jim, Scrotum Poles,plus bonus tracks, plus many many more.
Not Avalable in shops.
File under UK DIY.

DOWNLOAD from the high road HERE!
Posted by Jonny Zchivago at 23:44

I love me some messthetics! But damn you're brave. Aren't these cunts that put this out that are as bad as the Flying Nun twats at throwing a full on snitch bitch tantrum (or Hal for short ☻) over anyone sharing the other people's shit that they stole themselves or got donated for free and so are whoring out I suppose you could say!? Damn that was a long quip-n-question. Sorry. Anyways good luck dude I am hiding under the desk. Feel free to take your pants off. You know because it's summer and it gets hot and stuff... but mostly for this. There are many ways to pay for booty. That's a pirate joke hoe. ♥

yES, i'VE HEARD OF A RATHER HEFTY SLICE OF HYPOCRICY EMANATING FROM THAT BLOKE AT HYPED2DEATH, BUTCH OR SOMTHING HE'S CALLED.....caps off.....as fer feltching nun, i have received none......none? geddit?.....other total cunts are,Come Org, Hal McGee, Zoviet France,Chris and Cosey(aka Industrial Records),Crawling Chaos, and the bird from Nine Circles who got apoplectic when I described her and her older boyfriend as Paedophile Parents.
Anyway I still have my three strikes intact from Google,and its all backed up, so bring it on.

The blokes name is Chuck Warner. I have a shelf full of his CDr's that are unplayable any longer due to disc rot and paper labels. I reach out to him for a few replacements maybe - he suggests I find a circa 1999 IDE 24x CD-ROM drive "cuz they work for me..." rrright.