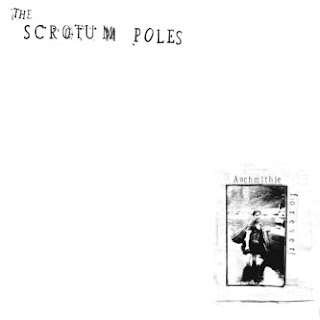 With the state of crumbling modern Britain, and the rise of this Xenophobic Brexiteer nonsense which has permanently split the UK,the opening track of this LP becomes strangely topical...... in the words of the mighty Scrotum Poles "It Just Aint Fucking Funny".
Watching the "Democratic" Football Lads Alliance marching in their tens and dozens, even less, against Islam, made me wanna vomit....as much as i wanted to laugh at the ugly wall of aging skinhead gammon provoking the Police, i'm afraid it really is NOT fucking funny!
Now i've got that off my chest, I can type about some stuff we in the UK can actually be proud of.......you guessed it,the kings of Scottish DIY, The Scrotum Poles.
They liked The TV Personalities and Subway Sect, rather than the stupider end of the market, aka future Football Lads Alliance members.
Any band who can pen a number like "Helicopter Honeymoon" can do no wrong for your faithful scribe.So to discover a vinyl release of a selection from the Poles DIY cassettes was like unpacking my Scalextrick set at Crimbo as a kiddie.....but this time the dodgy transformer works.
All I wanted for christmas as a sad excuse for an adult was a Scrotum Poles LP, and now i've got one! Much better than a Dukla Prague awaykit for me Subbuteo set.
So, we've got alternative versions of "Pick The Cats Eyes Out" and ,of course "Helicopter Honeymoon", plus many unheard proto-indie bedroom classics.

DOWNLOAD and slide down the scrotum pole HERE!
Posted by Jonny Zchivago at 13:58

Xenophobic Brexiteer… nice! I live near Charlottesville, VA, where last summer the xenos felt comfortable enough to march around the UVA campus with Walmart tiki torches chanting charming little ditties like 'jews will not replace us' and 'blood and soil', whatthefuckever that means. I was so goddamn proud I could just shit. Looking forward to washing my brain out with this. Thank you for the aural laxative.

Sadly, its a worldwide disease in this epoch.The seeds have been sown by certain opportunist politicians fuelled by this post truth crap/conspiracy theories.The humans are reverting to type because there's nothing else to believe in. It goes in a hundred year cycle apparently.

Sure these aren't early Replacements outtakes? That's not a slag at either artist, just something that comes up as I listen to the ramble tamble and the hoarse shouty vocalist. Thanks for the post.

Thanks for these!
I'm only missing a couple, but would you consider a Pop Aural singles post?
Cheers, M.