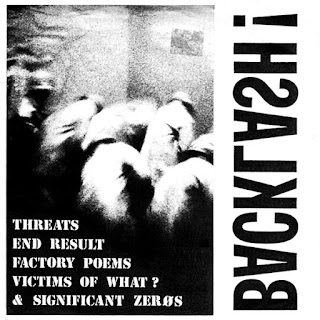 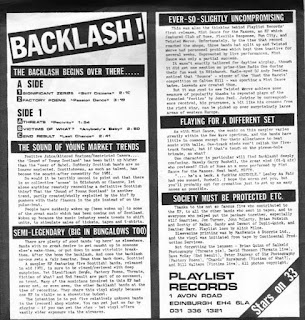 The follow up to 'Mint sauce For The Masses' was/is called "Backlash!". More Edinburgh also-rans making up the Post Punk numbers with Five more melody-free ditties from the dustbin of new wave Britain........But thats how we like it down here!
I dunno but the songs titles seem like better band names than the actual band names, and the actual band names would make better song titles?.....or have I just got them mixed up?

DOWNLOAD before the backlash HERE!
Posted by Jonny Zchivago at 16:03

As I mentioned in your 'Mint Sauce' post, not all of these bands were from Edinburgh. Factory Poems were from Glasgow and End Result from Airdrie. The Threats (Dalkeith) and Victim's Of What? (Penicuik) just about count, both Midlothian suburbs. Significant Zeros were Edinburgh based but only two of them were local, having formed originally down south while studying before heading back up the road.

'Stiff Citizens' was also released as a 7" in it's own right on the Dingy Toons label. The Threats did a couple of 'UK-82' singles on Rondelet and some later reformed stuff which doesn't count (I don't count anything after about 1984 these days).

I agree with the band names/song titles thing, if I was 30 years younger I'd consider starting a band called Anybody's Baby!

Indeed James Trash, I struggle to pass the invisible wall of 1984 too.....and i'd love to be in a band called 'Anybodys Baby'.

Passion Dance is one of my all-time fave tunes. Bought this ep when I was just 12. I was a cool 12 year old, what can I say.