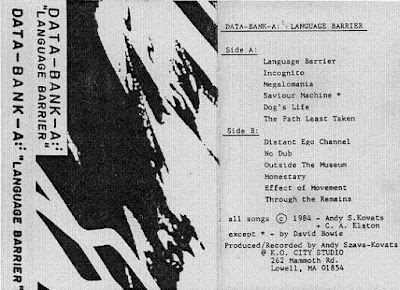 Its 1984, and More Americans are making that Faggot music with Synthesisers. I can imagine a mob of good ol' boys giving that black clad pale youth with eyeliner and fringe, a good kicking;smashing up his Roland SH101, and carving AC/DC on his under developed pectorals.
What better way to react against the NRA (Nationalist Rock of America) than making a synth pop record?
In the dumber parts of this grating country, you took your life in your hands making non-rock music like this. Don't forget this is a place where, in 2016, far more citizens were murdered by the cops than were murdered by Terrorists.They should be bombing the Police stations rather than ISIS in Syria, if they want to defend the American People.
What they wanna do is have more GLBT's than 'Skull and Bones' Paedophiles in their joke of a democratic government.Then, the war would be called OFF,and Texas closed down.
Having said that, I've no idea if Data-Bank-A have any GLBT's,or even 'Skull and Bones' paedophiles within their ranks,nor do I care;but to an inbred cowpoke and his sister/wife, they certainly will sound like they do.
Nor, do they come from Texas.....lucky them.
But, it is a half decent minimal synth tape,and that's worth more than any boneheaded Grunt blowing away some dehumanised Arab kids like its all a PlayStation game.

A1 Language Barrier
A2 Incognito
A3 Megalomania
A4 Saviour Machine
A5 Dog's Life
A6 The Path Least Taken
B1 Distant Ego Channel
B2 No Dub
B3 Outside The Museum
B4 Monestary
B5 Effect Of Movement
B6 Through The Remains...

DOWNLOAD lots of data from the bank,then withdraw your money from your economic terrorist bank,HERE!*

*Whoops! I mentioned Terrorism,so hello to the GCHQ/NSA employee who has to read this crap.....download the tape instead, its good.
Posted by Jonny Zchivago at 15:44

I live in LA and agree with everything you said about America.

I actually love most Americans,and the country/countryside,some cities and most of its alleged 'Ideals'. But what it's governing forces have become is something to be abhorred and revolted against.....an increasingly difficult thing to do in this false flag fear laden orwellian present. My homeland, the UK, is as bad,but at least our police don't murder many people,only the odd patsy for the Secret services.
We're all fucked!

I think we're getting better... Bernie Sanders is getting pretty huge.

I don't intend to stop,even from beyond the grave.
Many thanks for your kind words.
Much appreciated.

The worst is still to come. President Trump? At the moment of the state of the union address we may as well have all of the "right thinking democracy loving freedom loving citizens of the greatest country in the free world" take us out the back and shoot us in the head. Or welcome to the new strange fruit ...

"Liberals" are the new Mexicans for the neo-McCarthyites. Terrorism also comes in democratic forms ... creationism taught in schools, the freedom to shoot whoever you like if they are not white and the freedom to rendition and torture people secretly by annexing parts of other countries to avoid your own laws ... and on and on and on ...

Trump.....you know what,he may be horrific but I suspect he has no establishment credentials....so he won't win.Clinton is far more sinister.
I expect Bernie Sanders to die in the coming months,from that classic CIA ruse ,'the sudden heart attack'. The Clinton/Bush dynasty will continue,like the 'royal Family' and their relatives Cameron and Osbourne. Its already been decided.(Just like the upcoming EU referendum-dum) THE oNE wORLD gOVT!
The sad thing is that this Paranoid Rant has basis in fact,and they don't really try to hide it.....the Totalitarian tipToe.
Here's a funny story for ya.....last year i made a comment on some Conspiracy theory blog about hideous paedophile Keith Vaz, alluding to some evidence i have about his predilection for young under-age boys. ie, paedo porn (Iron Boy and Spartacus, lol) found under his bed when we(we did a man and van thing) moved his stuff to london in the 80's,with corroborating witnesses to boot. The next day i was bombarded by e-mails from the press and TV.....i agreed to talk to the good looking one, a bird from the Gaurdian/channel 4. She said they had loads of stuff on him and it was gonna blow.....then it all went silent,and some fucker tried to kill me by driving a car into my car on an empty motorway. Coincidence I hope!..but nonetheless Vaz is a nasty piece of work,like most of the houses of shame.
Communist is a bit harsh, another Rothschild financed political smokescreen. Zero Govt pleeze,break up the cartels,and introduce a profits and earnings cap to achieve sustainable zero percent growth.......ok, i'm bored,but i still mean most of it......Man City aren't looking too clever of late?

Yeah, Clinton as the saviour of the free world. Maybe David Icke was right after all and we just need to unmask the alien reptiles. Worker's self-management systems today (if people would just stop being such greedy bastards).

City? Injuries all starting to come back. Slap the scousers today for the first bit of silverware and then march on to inevitable victory and open-top bus parades. Nothing to worry about hahaha ...