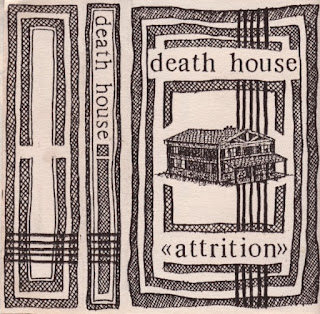 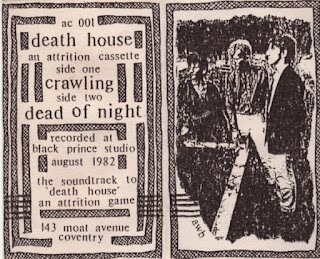 According to Discogs, this was the tape that invented "Dark Ambient",which is ,as usual, total crap.That accolade probably goes to Kluster,or  at the latest Lustmord?
I'll use more from Discogs' slushy superlatives, 'Rich Shadowy electronic soundscapes......interweaving the ephemeral with the operatic'...what?......'gloomy atmospheres mixed with prodding beats;classical bombast melded with ambient noise'......there's more!......'enveloping listeners in a dense nebula'.
Put that sick bucket aside now, as this isn't too far from the truth. I'd write something similar myself, if I wasn't listening to Leicester City beating Liverpool 2-0 on the radio.So I might as well snaffle somebody else's pretentious waffle.I'd watch it on TV but the rights have been bought up by the ruling elite to sell it back to us for a massive profit.
"Death House" tonight, means the death of the working classes right to the stuff they invented to entertain themselves. At least we're fighting back in the music world by taking down the record companies. There's more music around now than there has ever been,and it's mostly free or very cheap. Reclaim the streets, and come on yee Foxes to reclaim the Premier League for real football clubs.

A - Crawling
B - Dead Of Night

DOWNLOAD some classical bombast in a dense nebula HERE!

Anyway ... I've got a season ticket at City so am at all of the home games. I watch my away matches via the links posted on the wonderful http://shadygiz.blogspot.co.uk/ ... fuck the inflated system and all that kind of thing ...

If we don't win it then I really hope you do (mind you we will be pulling your pants down on Saturday).

Oh yeah, music blog ... what a right bit of old pretentious cock end of a description from discogs ... I almost don't want to listen to it in case I end up agreeing with it.

When you say the word 'City', i am guessing it is not Coventry City you refer to? As Cov is the home land of Attrition and Adventures in reality?
The reference to Saturday informs me you are a Manchester City exploitee? Ah yes,not so long ago they were floundering in the third tier,now after the injection of some muslim billions they are in second place in the Premier league.....how things change....or at least bought?....football banter,don't you hate it?
Saturday? Could be a fine opportunity for LCFC to display their lightening quick counter attacking footy against a depleted Man City squad with far too many matches to play,and an already replaced manager.Just let 'em have the ball,and get Huth to elbow Aquero.

Someone say Music?
Yeah, its not bad this tape by the way.

It's The Citizens ... which is appropriate for the only team from Manchester!

Yes, I've only been to LCFc vrs Manchester sides in manchester twice...to Maine Road in about 1990-something when we lost 5-1;and to old trafford,again in the 90's, when we lost...er...5-1. I find it difficult coping with success,especially as the ground is now sold out to rich fair weather fans....I was at St James park at the arse end of the 80's in a crowd of upwards of six thousand to watch Leicester v newcastle in the second division.....don't think man City got much more than that around that time.paying 6 quid to be fenced in and your head kicked in afterwards!....in some ways I prefer that to the modern era,am i mad?

I'll be watching the big match as its live on french TV....on a programe called, and i jest not,..."Match of Ze Day".

Anyway, The Citizens is a terrible nick name, and good luck for saturday....you're gonna need it.

I can't say as I understand much of the talk about foot and balls and citys but I do like this particular musical offering and the pertentious quotes froem the wonderful invention that is Discogs but, please, don't stop there; can we have some more Adventures In Reality.

What's not to understand? If the foot didn't exist then they would have to invent it so the ball had something to do and so people that should know better could spend most of their waking lives pontificating about things that mean relatively little in the grand scheme of things and generally lead to frustration and ennui (there probably should be a comma in there somewhere).

Anyway, City fans are an easy target given the recent cash/success. I grew up in a family of Satan worshippers (can't bring myself to type their name) so didn't get the chance to see them live until I could afford the bus fare. I went to a few home games and in 83/84 (after we had been relegated) I started going home and away and didn't miss a single match for over 5 years. During that time we had a 16 month period where we didn't win a single away match. Been there done it.

Chelsea and Newcastle would get 8,000 crowds when it went tits up but never City. We have this perverse genetic defect where the worse it gets the more you want to go. At points during the 80s. I'd be on the Kippax and there would only be just over 20,000. generally it was 30, against Charlton when we were promoted (?87ish) there were over 45 thousand. When we were in the old 3rd div the season average was over 28k. In the final years of Maine Road they had to build temporary "Gene Kelly" stands to get more in and it was always sold out at over 34. Most of the people at the ground now were there then and have a secret grumble because we win things now. I hate seeing the tourists who turn up now because it's an "event" but it's a consequence of the gentrification of football ... taking selfies before kick off so they can post them on social media ... fuck and off.

Went to Filbert Street a lot and we got beat. One unpurgeable memory is getting beat 3-1 and some 16 year old YTS kid hitting a tame shot from about 40 yards and the keeper falling over it and it trickled through the mud and stopped 1cm over the line. Happy days.

I'll let you now what I think of the tape at about four o'clock on Saturday ...

come to think of it, I do remember being astounded that 30,000 would turn out to watch Man City....at one point in the top tier,in the Lineker years,Leicester were doing reasonably well and the crowds were around 8-10,000,and most of them were vicious hooligans.Most footy fans were too frightened to attend. It all changed around 1988,the second summer of love.One week a certain thug would be slashing you with a double bladed stanley knife,the next he'd be hugging you,and luvved up on fucking 'E'.
Horrible place was Filbert Street,but i miss it so.Generic stadia lose a clubs Identity,as does the gentrified plastic seating areas.
As much as i love us to win the league,so I can shut those fucking Forest and Derby fans still crowing about their Title wins in the seventies; i'd feel more comfortable with cosy failure,because that's my team; contrary to this american sporting philosophy of win,win,win,it ain't about winning for us.
Don't think Leicester are any different to Man City; we have multi-millionaire investors also;they are just more subtle/frugal in splashing the cash.
Well,at least Man Utd are finished as a challenging force for at least the next twenty years.

Well if it wasn't for your flat footed defenders,and lazy midfield it would have only been 2.Then there would have been no need to allow that consolation goal at the end.
Don't worry I have gloated about it in the blog world,something i'm ashamed about;but it feels good. Bring on the fucking Gooners.

hahaha ... I was sitting at the match thinking that Jonny's gonna shove this up my arse!

Given that you don't even have the decency to endure this shitty country, I don't know whether this reached your ears. A few weeks ago, a caller got in touch with 606 and spoke with former LCFC hatchet man and all round (pea)cock Robbie Savage:

Hi, yeah I heard that fan on 606..i tweeted it....in fact he called again today after the match.He says he was quite proud of his display of sensitivity. A New man footy fan?
I think i might cry if we don't fuck it all up before the end of the season. Then what do we do then?....I couldn't give two fucks about the champions league and those poncey continental teams.
Yeah, I love football and Music;two beautiful art forms,full of analogies for life.