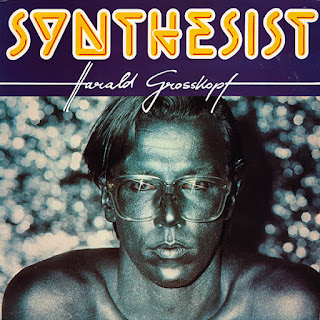 Much in demand drummer of Wallenstein, Harald Grosskopf.......without using google translate,I'd like that to translate that as Fat Head?......indeed, Harald Fathead drummed for nearly everyone who did't matter during the Krautrock era ,and for some who used to matter,and,inexplicably, for similar ex-drumming 'synthesists' such as Klaus Schulz.
As with most 'drummer boys, they are all haunted by this need to prove themselves as overlooked musical genius's.Not having one of their songs accepted onto the band's playlist is a major cause of departing Drummers everywhere.They really are just guys who hang around with musicians...with the odd,or very odd exception.
The only other drummer who got painted silver story i know of, was when Tony, Geezer,and Ozzy, painted a drunkenly comatose Bill Ward,drummer of Black Sabbath, Silver;An alcohol and cocaine fueled stunt that ended in hospitalisation for the poor lad.Narrowly escaping death it seems. Boys will be boys as they say?
As for Harald, he had no such excuse for painting himself silver. I can't think of any Krautrock hell-raisers who would have done it to him,especially not in Wallenstein,so i can only guess that the silly sod did it to himself"!?
Were there any Krautrocking wild men? Would be interested if any of you lot know of any......and i don't mean any German's who deliberately failed their maths exams,like Krazy Klaus, or crossed a road without looking and listening.
Notorious German sensibleness is a hard thing to pin down.I guess its to do with all that American financed post war reconstruction, that led to the economic miracle.Whereas the British had to make do with living in bombed out shiteholes like Birmingham on rations,after the country was bankrupted by saving the planet from tyranny and having to pay back the massive loans to the USA....our allies?...who then preceded to give the repayments back to Germany!..but at least the British empire was destroyed,and that was the US's main objective.After all,a famous american order to their Air farce was NOT to bomb any Ford motor company property,as they were churning out trucks for the Third Reich at the time. Plenty American companies made it harder to defeat the Nazi's by continuing to do business with them.The best one was IBM's early mechanical office tools that helped them kill more Jews. (I assume thet Sandy Hook guy will take objection to this in the comments?)
So after being fucked over and left to fester in squalor by the Americans naturally the disaffected youth of Britain would go slightly over the top when it came to revelry.The result of a real repression that was only matched by The German Democratic Republic, who Germanically remained sensible due to being followed everywhere they congregated by the Stasi...i suppose that experience gave the world Rammstein,whether that's should be celebrated is another matter entirely.It did after all inspire the Columbine massacre......a very clever under handed form of revenge on an old enemy I suggest?
When Kraut rock was first becoming fashionable, I spied Harald's silver fizzog in the "Euro-Rock" section of Revolver Records,in the even more exotic,but grey, surroundings of Leicester Marketplace.
The distant cries of "Tater's 10p a pahnd"(pound/lb's)...come 'n' feel these tater's darlin,Onleh 8p a pahnd for you love!"...piercing through the thick odorous haze of rotting banana's made this album a must purchase,then back home on the bus.
It turned out to be better than that CAN album I got the week before (Soon Over Babaluma ,£3.99), full of all the thick Berlin school analogue sumptuousness of bubbling sequencers,melting mellotrons,and sweeping string synthesizers any young person could wish for,but with a commercial edge;and its still good today kids.
Never heard of him again,so I long suspected that he had again painted himself silver and this time succumbed to the call of the Boatman...or the Baumann ?
Tracklist:

Always the best introduction to new ( old ) music. Thanks Jonny. Looking forward to this one as usual!

His drumming for Schulze is quite good. Sort of jazz techno, instead of boom chick boom - boom chick. Appropriate.