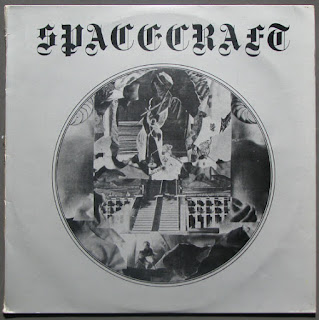 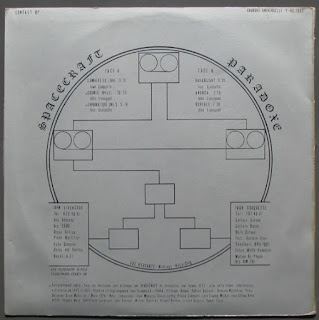 It looks Kraut,sounds Kraut,feels Kraut,but it's French.....ish......naturally there's a English guy involved.In fact an English Gentleman from no lesser electro-rock outfit than Bill Nelson's Red Noise,namely the eye-wateringly famous, John Livengood...yes THAT John Livengood..This has gotta be good then....LivenGOOD at least?
Yeah, I've never heard of him either,but google has.
The Paradoxe is that this is one of those records who would be quietly inserted into the post-2001 Krautrock sections in your local CD emporium,keeping it hushed that they were mostly Frogs ,but in the vinyl days they would have been lost in the dreaded vacuum of the miscellaneous category. Its not German but it's Kraut era Space rock-a-like,aka la Musique Kosmiche. It's a mixture of influences,worn boldly on their wizards' sleeves,including such obscurities as Early Tangerine Dream from their Alpha Centuri era, the BBC Radiophonic workshop,and Early Electronics.
As for 1978,the market would have been rather limited for shifting units of this kind of hippie nonsense.But thanks to the small-mindedness of the 1970's buying public,these treasures are left to fester like musical dinosaur footprints in the muddy waters of re-issue detecting.
French Prog and all it's tendrils,are often lazily dismissed as German,or just European.....of course the Brits don't consider themselves at all as European,and refer to mainland Europe as "The Continent".This is also applied strenuously to music; "Ahhh, That's European",they'd announce,meaning "Continental"....and also ,most probably..."Rubbish".
As a young lad,I too harbored this assumption that anything 'Continental'was ,by definition, automatically Rubbish....I mean look at ABBA....total Eurotrash nonsense with rhymes and ear piercing double tracked vocals. This attitude changed,when I realised that DAF were in fact, German.A fact given away because they sang in German,rather that English with cheesy foreign accent style so beloved by all Eurovision acts....and they (DAF) were,shockingly,.....Good?! Then Sounds started writing about CAN,which opened a whole new world for me...overlooking the terrible sartorial styles in evidence, favored by the main protagonists .Something the whole musical world outside of the Anglo-Saxon world has still to figure out.Even DAF looked like a couple of sweaty S+M rubberclad rentboys .There was Kraftwerk I suppose,very smart looking gents,if a tad silly on the we are Robots front....and normally anyone French turned out to be Belgian.Generally The Benelux mob could qualify as UK overseas territory musically,so they qualify as exempt.
Then once discovered,every Kraut/French prog record is consumed and hailed has the best thing since sliced Roggenmischbrot.
That is until you've heard them a few too many times,and ten years later realise that 90% of it is in fact shite after all.Even CAN i find rather dull theses days....or is that....titter,smirk,laff.....Amon Dull?
Alas, Spacecraft I have heard but twice, so I don't think this is shite yet.....come back in ten years and it certainly will be so.
Tracklist

For instance, Asia`s "Aqua" is rather bright, isn`t? Just listened. I think these days the first outing by CAN I had chance to give a listen, "Inner Space", is still the most evocative.

Hey, I know I bumped my head pretty bad this morning when I opened the fridge, but I think this is pretty good!

I think this was almost a recommendation and there's definitely enough clickbait within the disparaging remarks to make me salivate a little bit. Good enough for a couple spins on your turntable is good enough for me, especially since I consume most music in random one track bites over a period of many years. Thanks and Happy New Year Johnny!