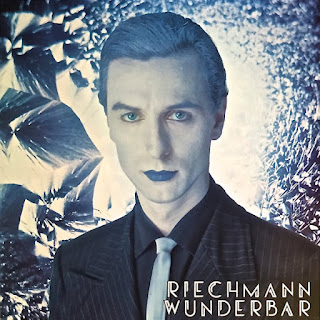 After encountering Harald Grosskopf's rather good "Synthesist" album,I noticed there was another German in full makeup with expertly groomed lacquered blue hair....also in the "Euro-Rock" section of Revolver Records.....This is not the image one had came to expect from Germans in pop. Terrible, long fly-away hair, afghan coats and unkempt handlebar mustaches were just a few of the minor indiscretions against fashion that I had noticed,particularly among members of CAN .This chap, Reichmann could have been in Duran Duran.
Expecting some disco Kosmiche mash-up, I wasn't put off by the BBC Testcard music of the opening and title track.....strictly not Wunderbar at all.
However,as I had just spent the best part of four quid for it I persevered, and ultimately found it riechly rewarding.Full of analogue wunders and sweeping seascapes to satisfy any disillusioned punk rockers into the realms of relaxation .
Dunno about the Blue Lipstick though....each to his own i guess?
There's always gotta be a downside to every story,and Wolfies' is no exception,as he got fatally stabbed by a  random nutjob shortly after this record was released. Destiny dictated that he would never make a follow-up,and due to his medical condition.....he was dead....he never did start that difficult second solo album;so there's no opportunity for my Third Riechmann LP joke...shame....Unless they have synth's in heaven,or in hell for that matter.
Both places being purely fictional, I doubt it,but at least a lot of early twentieth century Germans got out of certain eternal torture and melted away into oblivion.
Tracklist:

it's a great album and an even better (more fun) comment