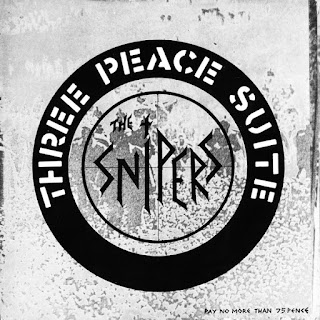 One of the better single releases on Crass Records was by the mysterious 'Snipers' from Oxford(Snipers are usually mysterious are they not?)......probably the official  Oxford University Anarcho-Punk band knowing the average profile of yer average Crass associated combo.
They're having another go at Religion again by the sounds of things. That should prick up the ears of Der Fuhrer in the producer's chair, Penny Rimbaud,or, in his usual pseudo self-effacing style, Penny Zenvy,as written in the credits for this release.He's ever so 'umble ain't he guv'nor?
They don't like War as well as Religion it seems....never heard that before on a Crass related release.
They ask the relevant questions anyway,namely who created God? Which,considering the Deity's two thousand year long silence, is an acceptable question which deserves an answer.Maybe he/it/she's just shy? So the next time a smug monotheist asks us de facto agnostics ,laughing, How can everything be made (snigger) from nothing? That's what your lying Scientists are saying" HaHaHa......?Yeah but,Who were your God's parents eh clever clogs?.......anyway, you misunderstand that something from nothing in theoretical physics terms doesn't mean actually 'Nothing', for Space is in fact jammed full of elemental particles and other stuff that has been proven to spark into life in laboratory conditions.Whereas no such evidence exists,in the slightest, of any God popping up from nothing recently...in fact Ever!
I have received a couple of death threats recently from Qanon and the american Taliban types,and I fully encourage the silly bastards to add to my collection as soon as possible.Just the kind of thing their Christ,God's parents Grandson, would have said in the Bible 2,as re-translated by Sylvester Stallone and Mel Glibson for a new epic Netflix flop.
And Jesus H. Christ said to the sniveling atheist scum,"This .44 Magnum says you're going to Hell unbeliever!If you see Charles Darwin down there,tell him he's next!"....before you ask how can you kill someone who's already dead, this is purely satirical...unlike some recent commets left on this blog!?
Even David Koresh's surviving Kids only politely called me a Total Fucking Asshole once,rather than saying that Death is too good for me. Maybe they're just worried about ones godless ways and want me to go to paradise for eternity,...er...with THEM!!!???...Help me kind Satan and give me eternal darkness.
Eternity is a long time, once said a noted philosopher (Woody Allen), especially near the end! Imagine going to a party that you can never leave!?....about half an hour at most 'parties' and I'm crawling up the walls to escape!
Even more Ironic is the rather obvious message scratched into the run out grooves of this single:
THOSE WHO CHOOSE TO IGNORE THE PAST....ARE CONDEMNED TO REPEAT IT!?
Rather like all those anarcho-punk bands who spent the intervening years from Crass's inception repeating Crass's first album.....for eternity!!?......just imagine a Crass concert that you are NEVER allowed to leave? The Infinite Crass Gig.....with Chumbawumba as support!.....in Hell it's just Chumbawumba!!!!!!! Kill me now...in fact don't! I have no desire to die with that prospect of eternal torture....please take me in your comforting arms sweet oblivion.Oh Quiet blank nothingness erase my soul,starting with my ears first if you don't mind?
Ahhhh Peace at last!

A The Parents Of God
B1 3 Piece
B2 Nothing New
DOWNLOAD the god genome HERE!
Posted by Jonny Zchivago at 12:51