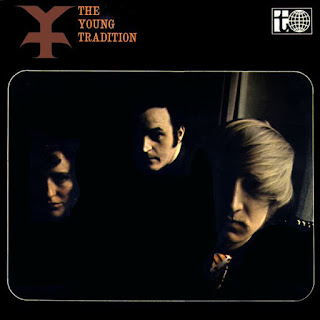 Groovy Baby! Its the Waterson's if they lived on Carnaby Street. Note the moody cover photo hiding their Granny Takes a Trip finery.
There must have been some Record Company meddling going on here,crossing the Waterson's with The Mama's and Papa's,and coming up with a still birth. That name too!? It sounds like one of those all singing, all dancing, groups of 'Young' people who invaded our homes during the Des O'Connor Show;but looking at them, they would definitely not  have got a birth in 'Hills Angels' on the Benny Hill Show.....unaware of this dodgy dance troop? Then treat yourself to an offensive on all levels clip of Benny and the Angels in action HERE!....blacked up old men, scantily clad schoolgirls,and what takes the biscuit...its superbly unfunny even on a child's level. We need crap like this NOW!
However, The Young Tradition,were as straight faced about their art as I was watching the Benny Hill Show.They seem,however, to have been accepted by the infamously snobby UK Folk Revival scene,the Young,and very middle class snobby Folk Revival Scene. They sang largely unaccompanied, like the Waterson's, were probably older than the Waterson's, but had a clothing budget,although  one of them had sideburns,and a comb-over baldness hiding hairdo,likely by Vidal Sassoon's dumber brother.
You can forgive the moronic record companies trying to sell this Folk Fad to the Beatles bobby-soxers, they were in business after all,even if they were clueless about the stuff they were forcing upon us.The Beatles were, after all, a contemporary electric Folk group. But John ,Paul,George and Ringo's vocal harmonies were certainly sweeter sounding that the harsh Folk realism of Peter,Heather and Royston's abrasive traditional vocalisations. The subject matter of the songs were usually X-rated,unlike the Fab Four's 'will you go out with me' storylines, so it was unlikely they were gonna trouble the British Market Research Bureau, who compiled the charts,too much.They were also terminally lacking in the Good looks department,something that was/is as essential in Folk Music as it is in Politics....Fuck the Music,Fuck the policies, the only thing that interests the casual human being is can you imagine wanting to fuck them....in this case,probably not,especially the groovy kat with the comb-over.
Tracklist:

A1 Byker Hill
A2 The Bold Fisherman
A3 Betsy The Serving Maid
A4 Henry The Poacher
A5 The Lyke Wake Dirge
B1 The Banks Of Claudy
B2 The Innocent Hare
B3 Dives And Lazarus
B4 Derry Down Fair
B5 The Truth Sent From Above
B6 Pretty Nancy Of Yarmouth
DOWNLOAD these crazy kids' first album HERE!
Posted by Jonny Zchivago at 11:13

Wow I can't believe it. That clip was the sort of stuff I'd see every Saturday night in late 70's /early 80's. We did only have 3 or 4 channels in those days, but it was wrong in so many ways. Thanks Jonny.

Watched the clip as I enjoyed Benny Hill in the seventies. Strikingly unfunny now and rather cringe worthy.The 14 year old me probably enjoyed it.

That godawful Benny Hill clip reminds me of a time in my yoof when I caught an episode of Masterpiece Mystery (BBC and ITV crime series that aired in the US on PBS) which featured a full half-second of naked side-boob--totally forbidden on US network tv! They re-broadcast the same show four hours later, so I stayed up til 1 a.m. to catch that half-second of naked side-boob again. It was sooo worth it.

Okaaay!...Who mentioned a full Half second of side boob....that's viagra to me,Now i'll have to sit down all day!