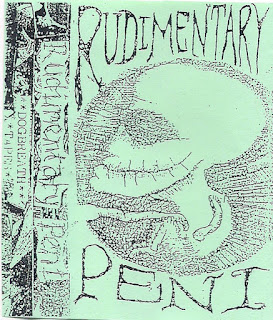 Indeed yes, the crowd managed to turn the classic "1/4 Dead" into a singalong number? A bit like what Freddie Mercury did to the Banana Boat Song at Live Aid....or Live Aids in his case. I would have loved to have heard Nick Blinko do the same with this lot in Derby '93. Not renowned for his intra-song banter, Blinko keeps fittingly stumm  between each mini symphony before they launch into the next minute long opera. Blinko's voice however is not in top gear for most of this rare appearance ,rarely achieving that effortless screaming tone he managed on the early Rudi-P material.I blame his medication.
I'm informed that UK Anarcho Punk is rather trendy in California in recent years?Even tempting The Mob to reform and play gigs again.Maybe even Rudi-p could get it together and do some more live shows,at least in Europe with this upsurge in interest from the golden state? We don't want former Anarchist,Steve Ignorant to corner the market over there now do we?
Track Listing:
1 Cosmetic Plague
2 Teenage Time-Killer
3 Discord in B-Ward
4 Play
5 Dream City
6 Crazy Chain
7 Flesh Crucifix
8 1/4 Dead
9 Crazed Couplet
10 Cosmic Hearse
11 The Gardener
12 Media Person
13 The Horrors In The Museum
14 Blind Dogs
15 Ocean Of Misery
16 Army Of Jesus
17 Blasphemy Squad
18 Tower Of Strength
19 Him Hymn
20 Hearse
21 Zero Again
22 Pain Inside
23 Teenage Time-Killer (Encore)
24 Dischord In B-Ward (Encore)
DOWNLOAD from the rudimentary city of Derby HERE!
Posted by Jonny Zchivago at 08:24