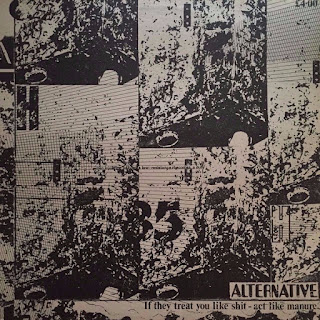 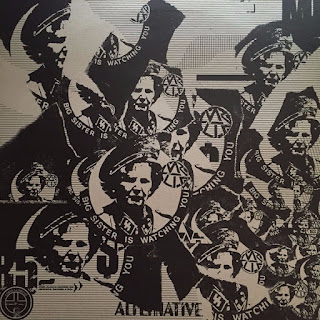 Ay up....it's only the Scottish Crass innit? Just like the Skids were the Scottish Sex Pistols,but were in fact, very good indeed,whereas Alternative are an alternative to nothing at all. Yes they sound exactly like,look like, Crass but without useful Essex boy on shouty vocals. And, oooh look, they didn't like Thatcher,who liberated more working class than any posh Anarchist ever did. Maggie gave us a national wage long before it was ever mooted in the political mainstream in the form of paid mass unemployment,liberated swathes of Yorkshiremen (The very same Tetley Bittermen that Seething Wells used to go on about) from underground slavery,and gave away houses to the lower stratum of society. Three very Anarchist policies. Without Mrs T your scribe would have been stuck in a factory for the last forty years,and now on a zero hours slave contract in an Amazon warehouse,alongside the grandchildren of those Tetly Bittermen who'd preferred them to have been stuck down a coal mine instead. Unlike Penny Rimbaud and mates I won't be entitled to a pension after i'm 67 (correct at the time of writing!)...I've gotta work until I die,mainly thanks to the new anti-Thatcherite conservatives that the very same liberated working class idiots in the north of England who voted for Johnson and his government of lying Cunts!?...can you fucking believe IT!? Lying is something that Thatcher never did....she told you what she was gonna do and did it.
'Big Sister is watching You' it says....turns out she wasn't,but they fucking are Now!
One plus point ,however ,is that Alternative are certainly NOT Posh. So, as usual, they had the joy of the Posher members of Crass inflicting themselves on these useful working class black clad proles,bring in their own drummer (Rimbaud), guitarist (Peter Wright) and ex-finishing school for young ladies screecher Annie Anxiety.Producing it for them...not that they asked! Trevor Horn did the same for Frankie Goes to Hollywood I believe.
I think it was Rimbaud's stealthy way of continuing Crass after they had split up...which was a lie it seems.Find some star-struck Crass worshipping anarcho-punk clones from 'oop norf',then take-over.....life after death Anarcho-Punk style.
And you just know that they are 100% certain they are 'Right',or in football language 120%.Its an effect of the British Public School 'System System System', just like Oswald Moseley,super Posh, and Super fascist, knew he was irrevocably corrrrrect. How wrong could they be?
I do however, have a soft spot for most of this Anarcho-Punk stuff however,in the same way that i get a nostalgic glow for my lost innocence when i watch Childrens TV from my own childhood. There is something so unerringly charming about the pointless adolescence of this toytown utopia that these kids,plus Penny Rimbaud,had built for themselves in their own minds.All they had to do was ask Thatcher to give them a council estate and they could have made it real. Reality is something quite frightening when your dreams are transported into bricks and mortar......but,there's always a 'but' isn't there? Crass didn't want to live in the sewers they sang about,they bought a big house in the Essex countryside far away from the underclass's who would have kicked their collective backsides back to their Trustafarian country retreats.
The album's title is a rather cringing and vain attempt at emulating Flux Of Pink Indians' "The Fucking Cunts Treat Us Like Pricks",which is one of the best album titles ever or what? Discuss?
Where are YOUR Hiroshimas eh?
Mine are in someones else's dystopia, not mine.
Tracklist:

A1 Another Subversive Peace Song
A2 Seen Through Tear Filled Eyes
A3 Mannequin
A4 Now I Realize
A5 How Many Times Sold?
A6 Love And Life
B1 If You've Got It......Don't
B2 Till Death Do You Part
B3 Death Isn't So Sweet
B4 Caroline's Carnival
B5 Suffer In Silence
B6 Struggling Through The Darkness
B7 Ireland
B8 Where Are Your Hiroshimas?

Mrs T may have helped you in the short term but she drove the country to ruin, socially and financially. I hope you are - as usual - being provocative and shit-stirring. If not, you are deluded, not to mention an utter cunt

Right, nice to have ya back. I was starting to worry, committed? dead? vacation? In any case, glad you were released, resurrected, back home. This does look rather seething. Suddenly, I'm feeling all nihilistic again... Bastards!

Oh, don't forget that the nukes over Hiroshima & Nagasaki was dropped by yer felllow ANTI-FASCISTS and forces for "democracy".

@ ANON...mRS t strategy was long term.You have to destroy to create,there was endless state support for the new britain. If there was the dole system we got got now in 1980 Wham would have had to get jobs as bog cleaners, and so would I and all my mates,except for the stupid ones.
I am shit stirring and I am an utter cunt...like you.

There's someone called Stu Crasshater?.....good point on the nuking...but its only 'cus they got it first.If any axis power or soviet Russia got there first there would have been no Crass!!!!...hey wait a minute,i'm gonna have some awkward questions for Adolf next time I summon him in a seance!I'm not happy with him losing the second world war and allowing Crass to happen!

Indeed Rev B.....I believe in Nihilism.
My absence was due to that old advisary .....WORK!...I'm fucked.
Glad to hear you were worried.
XX

Work! Now why didn't I think of that? Lazy sot that I am, it'd be the last thing to occur to me. Next time he pops up, let 'dolph know rev.b sez hey.

Seeing Maggie T's been a topic of conversation here, Perhaps they'll be some interest in this from over @ Zero G Sound:
Thatcher On Acid - Curdled (1987)
http://zerosounds.blogspot.com
Sounds right up my street. I've always relished using high profile political types' words against them.

Those bombs were only dropped in order to kill people.

Exactly Northfield hat.....killin's as natural as making sweet love to an Ocelot